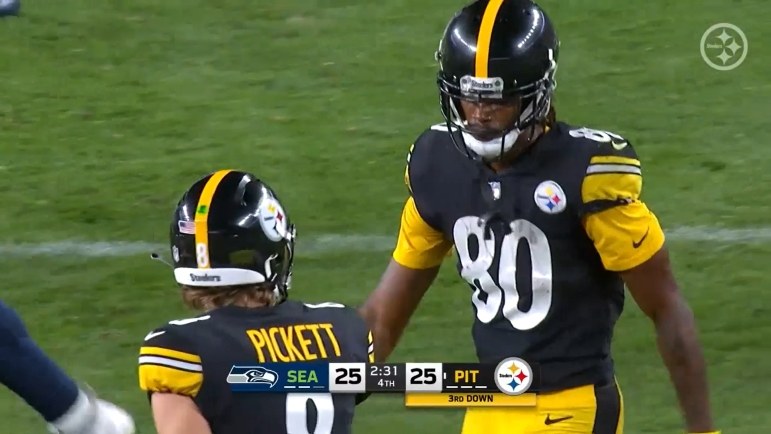 First-year wide receiver Tyler Vaughns has been attracting attention to himself this preseason. Indeed, it’s the first look most Pittsburgh Steelers fans are getting of him, having signed to the team’s practice squad in September of last year after being cut by the Indianapolis Colts as a rookie college free agent out of USC.

He did, however, spend the entire year on the practice squad, and is hoping at worst to resume that post. His impressive playmaking to close out each of the first two preseason games—in the first, breaking a tackle to score the game-winning touchdown, and in the second, recording three catches on the game-winning drive to set up the score—has been notable, as has his rapport with rookie first-round quarterback Kenny Pickett.

“He was here in rookie camp. I did the rookie camp with the guys earlier this year”, he told reporters on Thursday, via Teresa Varley writing for the team’s website, about the chemistry he has built with Pickett. “I got a little connection with him then, and then coming into this camp, we just kept going and going”.

Admittedly, much of his work this preseason has actually come with Mason Rudolph at the helm, including on that second drive that I described during which he caught three passes. But we also have the training camp practices to go from, which have been amply recounted, and which point to a certain relationship that has yielded positive results between quarterback and wide receiver.

“He’s willing to take some risks. Some throws some quarterbacks won’t throw, he will”, Vaughns said of the rookie. “Not saying other quarterbacks wouldn’t, but he just tests the waters a little bit more”. That’s something that we have to see more of in-game, during which he has yet to attempt a pass 15 or more yards beyond the line of scrimmage.

As for the receiver, he acknowledges that the numbers game is in the back of his mind, as it inevitably will be, and admittedly, the Steelers do appear to have a full complement of wide receivers ready for the 53-man roster before taking him into consideration.

Diontae Johnson and Chase Claypool top the depth chart, naturally, with rookie second-round draft pick George Pickens fitting right in there. While he has missed the past two weeks of practice, Calvin Austin III, the fourth-round rookie, seems assured of a spot, as is return man and slot receiver Gunner Olszewski.

Veteran former second-round draft pick Miles Boykin has long appeared to be the frontrunner for the sixth wide receiver spot, especially after Anthony Miller was lost to injury, but aside from Vaughns, another veteran, Steven Sims, has striven to make a push as well.

Like Vaughns, Sims also spent all season on the practice squad a year ago, so he is already well-versed in the offense and the team culture. And we also can’t forget about Cody White, which I think we often do, who, after all, spent most of the 2021 season on the 53-man roster.