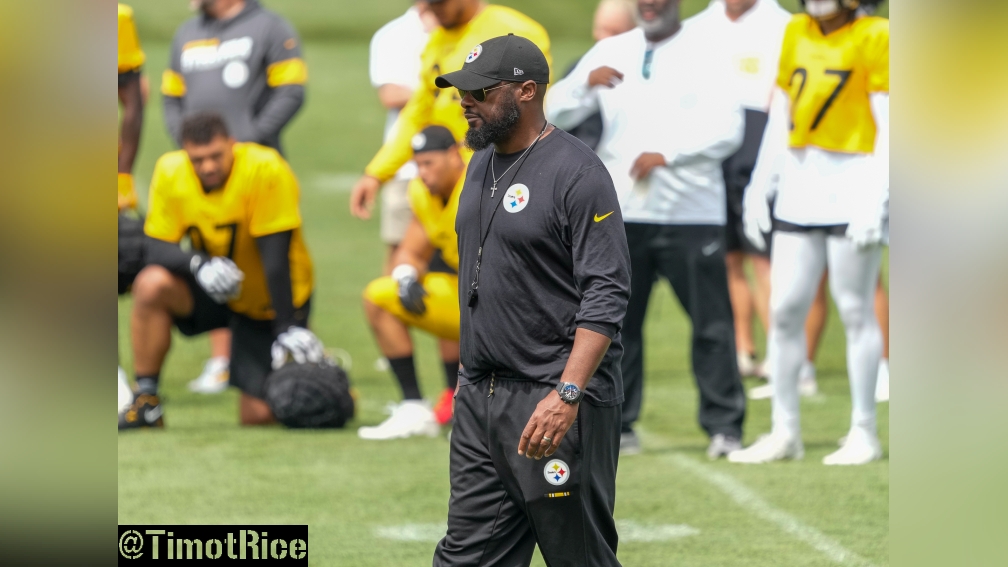 The Pittsburgh Steelers wrapped up their first week of training camp practices on Saturday. And when they resume practice on Monday afternoon, it will have a different look and feel to it—one that head coach Mike Tomlin very much welcomes.

“Thankfully today is the last day of acclimation, and so we’re pushing more towards some football”, he said in his opening remarks addressing the media after Saturday’s practice session. “Next time you guys see us, we’ll be carrying full pads, and that’s just a significant component of this process. We’ll get an opportunity to stop speculating and start looking at the realities of playing, so it’s a big day for guys”.

There is perhaps nobody in the league who revels in every aspect of the coaching of the game of football than Tomlin, but who doesn’t get excited when the pads come on? It’s a very different thing compared to practicing just in jerseys, and as he said, it brings up much closer to something that is football, rather than something ‘football-like.

“You’ll feel it on Monday. I promise you”, Tomlin said about the difference in tone of a padded practice. “Looking forward to it”.

While the Collective Bargaining Agreement regulates how many practice days a team can actually practice in pads, Tomlin’s Steelers take greater advantage of every opportunity than just about anybody else in the league.

Though some other teams have adopted the trend in recent years, Tomlin was among the first coaches to reinstall full-contact, live-tackling scrimmage sessions into his training camps a number of years back, something that had virtually fallen completely by the wayside—Larry Foote, who was drafted in 2002, had said that he had never done it before.

Said Tomlin in 2013 when he began bringing back the live contact drills, “It’s just appropriate in today’s NFL. We have off days. We only get a chance to practice once a day. There are fewer and fewer opportunities to sort themselves out. We’ve got some young guys. We’ve got to sort through a lot of young guys and we’ve got to take advantage of opportunities to show improvement. That is what it is about”.

Perhaps somewhat ironically, it was in part the new CBA of 2011, which greatly curtailed the number of practices and frequency and length of practices that teams could conduct, that helped spark the trend of more teams using live-contact drills to get their teams prepared.

Of course, even with the tackling, there are shrewd and necessary limitations. You still don’t sack the quarterback. Certain veterans may not participate at all. But it’s by far the closest thing to real football you’re going to get outside of a stadium, which is why Tomlin has been running these drills now for a decade.