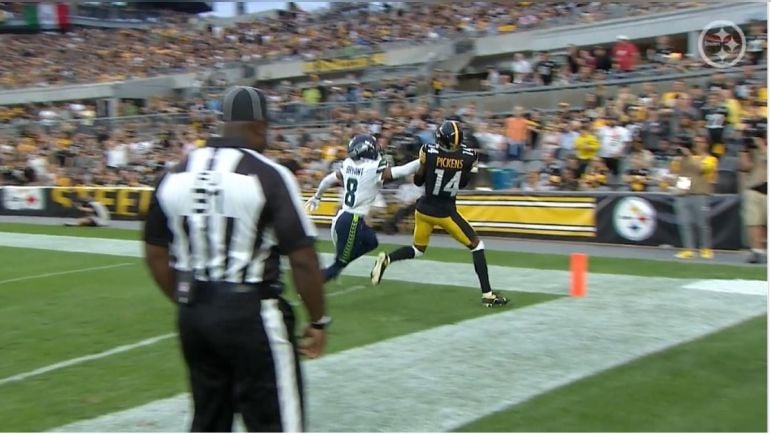 Pittsburgh Steelers’ football is back. So are our weekly winners/losers lists. The highlights and lowlights from the team’s preseason opener 32-25 win against the Seattle Seahawks.

Mitch Trubisky – Trubisky beautifully ran the show the first two drives of the game. He displayed mobility and accuracy on the move, finding a wide open Gunner Olszewski to his left on the Steelers’ opening possession. Trubisky also avoided a would-be sack for a short scramble. Ben Roethlisberger’s lack of mobility was obvious but it’s nice to see a quarterback be able to create with his legs in a situation like that. Trubisky didn’t just keep his head above the water. He’s essentially cemented his starting spot in the regular season.

George Pickens – What fans saw Pickens do on his 26-yard TD is essentially what he’s done all camp. Pickens tracked the ball and got both feet inbounds in the back right corner of the end zone to put the Steelers up 14-0 in the first half. Pickens showed strength in his hands and high effectiveness as a blocker, helping turn good runs into better ones. He needs to work on his release package but he’s a killer in those jump-ball moments.

Joe Haeg – Don’t talk about offensive linemen too often but Haeg was solid running with the 2’s. Strong anchor in pass protection and though he faced backups, outplayed Dan Moore Jr. in this game. Haeg should easily be the team’s swing tackle and a stopgap option should a starter miss a game or two. I expected a longtime veteran like Haeg to play well and he met expectations.

Arthur Maulet – Maulet, like Haeg, is a pretty known and defined player at this point. But he still played well. He’s best against the run and when asked to play underneath routes, including a third down stop on a slant over the middle. He was steady off the edge against the run and blew up a couple of WR bubble screens.

Anthony McFarland – Good outing in a good summer for McFarland and oh boy did he need one. He showed vision and burst and created when things broke down. He finished the day with seven rushes for 56 yards with a long of 24, bounding a 3rd and 1 when everything was washed down in front of him. Rookie Jaylen Warren ran with power but fumbled and McFarland should still be ahead of him on the depth chart.

Tre Norwood – Norwood was strong in the red zone in this game with multiple end zone breakups. Big time plays in important real estate. Norwood has been used as the dime defender in training camp and his man-cover ability is getting him a spot on the field this year, especially with some other injuries in that DB room.

Steven Sims – Sims is a small/speed guy and someone who needs to make plays in open grass. That’s what he did Saturday night. He kicked things off with a 38 yard punt return left side and followed things up on a quick jet run right side for 38 yards, creating in open field. He capped off a good week of practice with a solid performance inside a stadium. A path to the 53 will be tough but he’s setting himself up to still land on the practice squad as insurance behind Gunner Olszewski.

Miles Boykin – Another receiver whose come on strong and carried that over to Acrisure Stadium (getting used to it yet?). Boykin caught just two passes for 17 yards but importantly, made a couple plays on special teams. Forcing a fumble on a bad decision by the Seahawks’ punt returner and following that up with a tackle on kick coverage. With Anthony Miller sidelined due to a shoulder injury, Boykin moved one step closer to that #6 WR spot.

Pressley Harvin III – Not often I put players in the winners column who didn’t play. But Harvin joined Chris Boswell as specialists who didn’t see the field tonight. That’s certainly a good sign for Harvin’s roster spot. I thought he would’ve been out there to see what he can do inside a stadium. It helped Cameron Nizialek didn’t do a particularly good job, either.

Kenny Pickett – Thought all the quarterbacks looked solid tonight to varying degrees but Pickett was good in his NFL debut. Nothing flashy but it didn’t need to be. I wanted him to take care of the football, look confident and controlled, and be on-time with his throws. He was all of those things. That’s a solid foundation and something I’ll walk away happy with for a first time through.

I wrote that above paragraph before the Steelers’ final drive, Pickett leading the Steelers downfield and connecting with Tyler Vaughns for the game-winning score. What a way to start things off. Can’t ask for anything more out of Pickett’s debut.

Dan Moore Jr. – After a decent showing in camp, Moore had his hands full tonight. The Seahawks have toolsy pass rushers and Moore got beat by rookie Boye Mafe that led to a Mason Rudolph fumble that he fortunately recovered. Moore get extra work alongside LG Kendrick Green. Hoping for a better outing next week from him in what’s a critical second year.

Run Defense – Stop me if you’ve heard this one before. Yes, the Steelers were without their stars and playing with backups. So was Seattle. Pittsburgh’s front seven struggled to get off blocks and rally to the football and didn’t fill the alley well enough. Seattle had success on the ground from the second quarter on, finishing the day with over 150 yards and averaging more than six yards per carry. On the plus side, the Steelers’ DBs were active and aggressive. It unfortunately led to injuries to Ahkello Witherspoon and Damontae Kazee. Hopefully both are minor while Karl Joseph could be looking at a season-ending injury.

Mataeo Durant – The good news is Durant was healthy enough to play in this game. He missed the back half of this week’s set of practices with an unknown injury. And he got into the game ahead of Master Teague. But he did little with the chance. He was blown up and run over on a third down play that led to Kenny Pickett being tossed down hard. His first carry went for a one-yard loss before giving way to Master Teague, who outperformed him. Durant did throw a nice block on a Pickett scramble late in the game, I’ll give him that.

Khalil Davis – I’ll eat a plate of crow for tonight. Expected a lot more from the Davis twins, Carlos and Khali, who both looked good in training camp. I paid special attention to Khalil tonight and saw him get washed against the run time and time again, one reason why Pittsburgh lost the line of scrimmage up front. The whole front seven was underwhelming from Mark Robinson (sans his forced fumble free off the edge) to Buddy Johnson and others. Davis at least ended on a high-note with a big stick on the game’s final play.