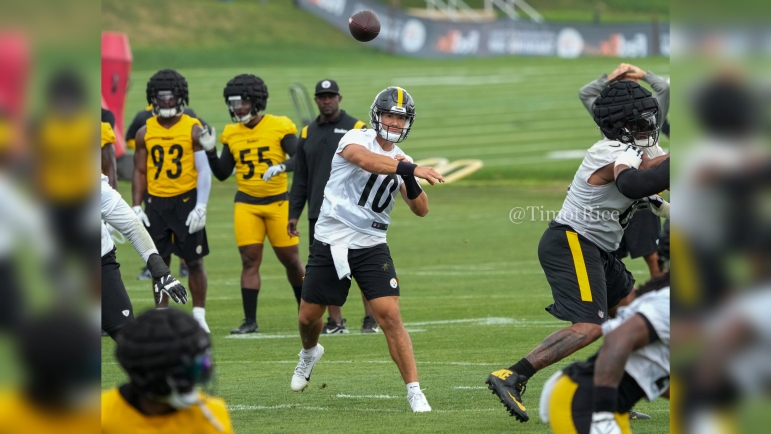 Through the first week or so of training camp at Saint Vincent College in Latrobe, the Pittsburgh Steelers’ defense has dominated the new-look offense in all phases, from run defense and situational football to general team 11-on-11 work at Chuck Noll Field, especially in the popular seven shots drill to open each practice.

In recent days though, the Steelers’ offense has found its footing and is starting to counter the defense’s body blows with some of their own. Though the defense won seven shots on Thursday by a 4-3 score, the offense showed some life as quarterback Mitch Trubisky found George Pickens for a touchdown, Mason Rudolph found Jace Sternberger wide open on a blown assignment, and Kenny Pickett threw his best ball of camp to Cody White in the back corner of the end zone for the score.

Prior to Thursday’s performance, all three quarterbacks had struggled in seven shots, but Trubisky received the most attention for his struggles as he was able to score just one touchdown in 19 reps through the first week of camp in the drill, raising questions. Recently though, the veteran quarterback has got it going.

That continued Saturday at the UPMC Rooney Sports Complex on the South Side where the Steelers moved practice to due to inclement weather. On the South Side, the weather remained an issue as in the seven shots format practice was hit with a hail storm, according to Trubisky, which shockingly gave the offense the advantage, leading to some positive plays.

And here’s QB1 on the Steelers’ initial depth chart. Mitch Trubisky speaks on another successful 2-minute drill at today’s practice, along with his growing connection with rookie WR Calvin Austin that led to a pair of impressive TDs during team drills: pic.twitter.com/pZJX7SQWet

“You just have to think about the situation you’re in and get the ball to your playmakers,” Trubisky said to reporters Saturday following practice, according to video via the Post-Gazette’s Steve Rothstein on Twitter. “I was happy about seven shots today. We hadn’t been doing good there for a little while, but I guess when we went into the hail storm, advantage offense. You wouldn’t expect that.”

Following a strong showing in seven shots Saturday, Trubisky followed that up later in practice with another strong performance in the team’s two-minute setting, connecting with wide receiver Gunner Olszewski to end the drive with a score. His strike to Olszewski came three days after he completed 5-of-7 throws at Chuck Noll Field in the team’s first two-minute session of training camp, connecting with George Pickens for the score to cap off the session.

Gaining more comfort and confidence in the scheme, Trubisky is starting to show flashes of those intangibles he brings to the table. That continued Saturday.

“Two-minute drill, the point is to always end with a score. I found Gunner; he ran a great route,” Trubisky said to reporters following practice, according to video via the Post-Gazette’s Steve Rothstein on Twitter. “It was great protection up front. I like our packages we’re putting together, and there’s just a heightened sense of urgency when we go situation to situation, it’s just on us to execute and try to win the drill. We’ve got great competition against our defense every day.”

Though it’s still relatively early in camp and the results of each session aren’t worth fully reading into, it’s at least a positive sign that the Steelers’ offense is settling in under Trubisky’s guidance and is starting to find itself against a stout defense on the other side of the football overall.