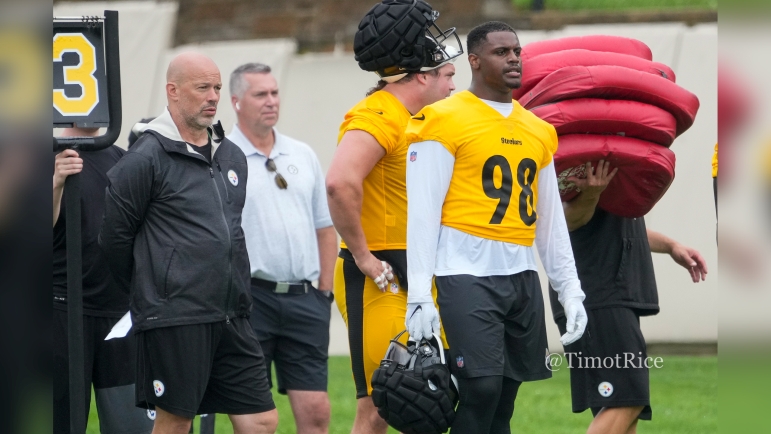 Though the Pittsburgh Steelers are a bit banged up across the board currently in training camp at Saint Vincent College in Latrobe, they became bit healthier along the defensive line on Monday as veteran Tyson Alualu was activated from the PUP list, while free agent signee Larry Ogunjobi made his debut in team sessions Monday at Latrobe Memorial Stadium, marking the first time the new addition appeared in a full practice with the Steelers.

The return of the two veterans is “a blessing” for rookie defensive lineman DeMarvin Leal, who has turned heads in training camp early with his explosiveness off the football and his quick, powerful hands at the point of attack. He’s defended the run quite well early in his tenure with the Steelers in training camp and has shown that quick get-off and ability to bend the edge against teammates in training camp, creating quite the buzz around the third-round pick.

With veterans Alualu and Ogunjobi back in the fold though, snaps might be harder to come by for the Texas A&M product. That’s alright in his eyes right now though, as he’s using the return of the two veterans as a learning opportunity, leaning on guys with experience to grow as a player into one that could make an impact in 2022 for the Steelers as a depth player, he said to Missi Matthews and Max Starks for Steelers.com’s UPMC Training Camp Wrap Up.

“Oh, it’s been a blessing just having older guys that can give you the little bit of information that they have,” Leal said to Matthews, according to video via the UPMC Training Camp Wrap Up via the Steelers Live official Twitter account. “You know, they’ve been here for years, so I take their advice very serious and just run with it.”

Prior to the returns of Alualu and Ogunjobi, Leal was running with advice he was receiving from the likes of defensive captain Cam Heyward and veteran Chris Wormely along the defensive line. Now, with Ogunjobi and Alualu back, Leal has two more veterans with plenty of snaps and overall experience under their belts to turn to.

Asking questions, learning new techniques and other tricks of the trade can benefit Leal in ways unimaginable. While the two veterans weren’t in practice, Leal stated to Matthews and Starks that they were both involved, especially Ogunjobi, helping the younger guys get up to speed and helping them improve on their craft.

“Larry’s actually being involved with everything, just letting everybody know what exactly to do,” Leal stated to Matthews, according to video via the UPMC Training Camp Wrap Up via the Steelers Live official Twitter account. “And just being the older guy, being a vet, anything that there’s question about, he’s there to answer it.”

That’s great to hear from Leal regarding Ogunjobi, who seems to have taken on a bit of a leadership role overall for the Steelers on the defensive line with Heyward and Alualu, even with him being on a one-year deal. He’s helping bring along young players like Leal, which is huge for the development of the defense overall.