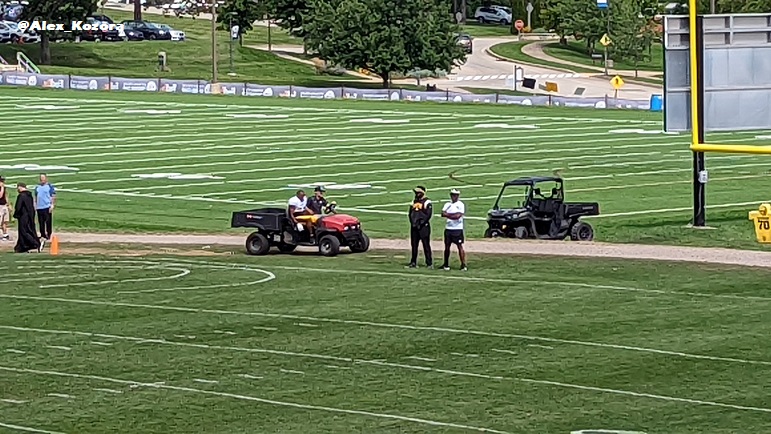 According to a tweet from the Post-Gazette’s Ray Fittipaldo, Teague is day-to-day, Tomlin said.

Arthur Maulet has a minor hamstring injury and Master Teague has a low ankle sprain. Tomlin said both injuries are day to day

Just a few days removed from a strong showing in the preseason opener at Acrisure Stadium against the Seattle Seahawks, running back Master Teague III’s bid to make the 53-man roster took a bit of a hit Tuesday at Saint Vincent College in Latrobe.

Teague is now being carted off. https://t.co/cQZpc3j4wk

Teague suffered a lower body injury during the team 11-on-11 session Tuesday, according to Steelers Depot’s Alex Kozora, after being tackled by undrafted free agent cornerback Chris Steele and falling awkwardly.

Teague attempted to get up and walk off on his own power, but had a noticeable limp before being carted off the field.

Leg/ankle bent awkwardly being tackled by Chris Steele along sideline. Tried to limp back to huddle but he's in pain. #Steelers

Teague’s injury comes as the Steelers were seemingly getting back to full strength in the backfield, as Benny Snell Jr. returned to practice Tuesday in pads. We’ll see what head coach Mike Tomlin has to stay about Teague’s injury after practice. Hopefully it’s nothing too serious, especially after the Steelers already had to place two players on Injured Reserve Tuesday as part of camp cutdowns, and already have veteran Jeremy McNichols on IR, which led to Teague’s signing.