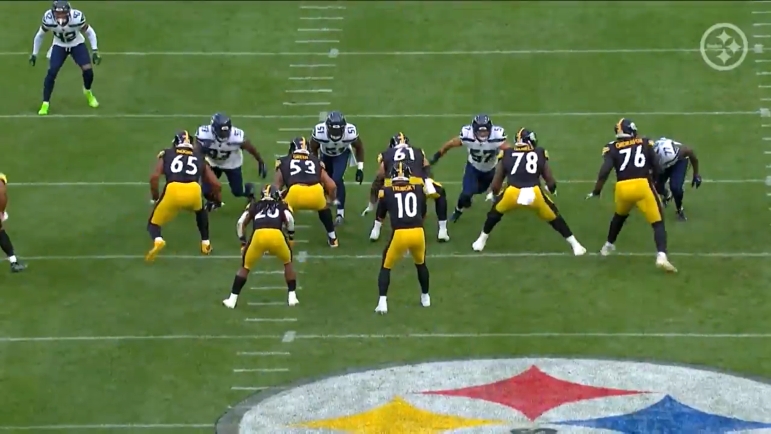 Much anticipation and hope surrounded the new-look offensive line for the Pittsburgh Steelers heading into Saturday night’s preseason opener against the Seattle Seahawks at Acrisure Stadium.

Coming off of a disastrous 2021 season that saw the offensive line struggle with injuries and consistent play after undergoing a significant transformation due to a retirement — two free agency departures and a release due to injury to four of the five starters from 2020 — the Steelers re-worked the offensive line this offseason, adding veterans Mason Cole and James Daniels in free agency, while shifting 2021 third-round pick Kendrick Green back to left guard to compete with Kevin Dotson.

Throughout training camp, the offensive line had some ups and downs, but much of the attention was going to be focused on the offensive line overall on Saturday night. Much like camp, the group had some up and some concerning downs, especially with allowing pressure and getting their quarterbacks hit on the night, the first group included.

Dan Moore Jr. gave up a strip sack to Seattle rookie Boye Mafe, Green really struggled to take advantage of the opportunity granted to him with Dotson missing the game due to injury, and Daniels struggled in pass protection overall, allowing a handful of pressures in limited action on the night.

Two days removed from the game and able to take a look at the film, the young Steelers’ offensive line believes there are still some communication-related issues that need cleaned up, at least according to Green, who spoke to Steelers.com’s Teresa Varley prior to Monday’s padded practice at Saint Vincent College in Latrobe.

“We still have some things we need to clean communication-wise. That is some of the issues we had [Saturday],” Green said, according to Steelers.com. “You might think one person gets beat, but it’s a communication issue, we aren’t all on the same page. Those are the things we are going to work on today and correct.

“It’s simple, not easy. When the bullets are out there flying you have a million things going on you have to look for, but we have to still stay on the same page. That is something we have to push though.”

PFF: It was a rough Steelers debut for former Bears guard James Daniels, who surrendered two pressures and was beaten another two times (not resulting in pressure) on just 10 pass-blocking snaps, pending review. #Steelers

That is definitely something the Steelers will have to push through heading into the 2022 season. With experience together and comfort, the communication issues will get ironed out. Still, it was definitely concerning to see guys late to pass off blocks on stunts and twists, late to pick up, or just guessing as to which player to take on a blitz because they were unsure of where the help was coming from, if any.

While Green stated it’s simple, but not easy, to clean up the communication issues, there was more to be concerned with Saturday than just communication issues. Green really struggled to hold up in pass protection against bigger, stronger interior defensive linemen, and had a hard time matching up with better athletes in space overall.

Daniels, for that matter, also had some serious issues with players in space in pass protection, allowing quite a bit of pressure on Mitch Trubisky early in Saturday’s game. Overall the unit looked fine in the run game, but communication issues alone weren’t the only problem behind the struggles in pass protection.