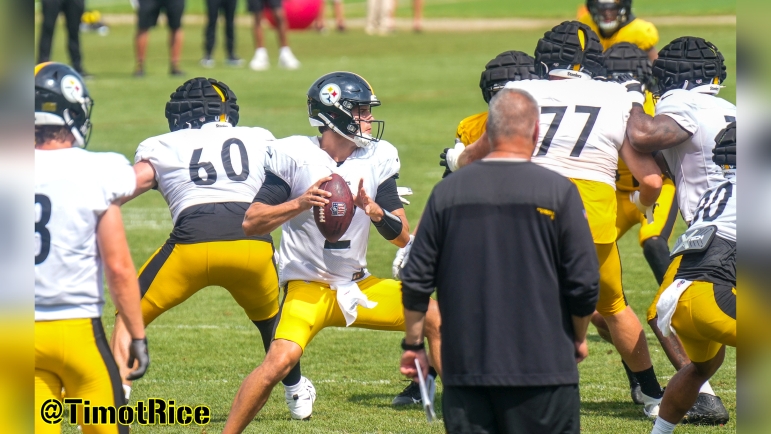 As the Pittsburgh Steelers added former Bears and Bills quarterback Mitchell Trubisky in free agency and subsequently Pitt quarterback Kenny Pickett in the first round of the 2022 NFL Draft, fifth-year Quarterback Mason Rudolph appeared to be the odd man out. Four-time Steelers Super Bowl champion running back Rocky Bleier recently shared his unusual opinion on the team’s three-way quarterback race.

“In my opinion, it’s up to Mason,” Bleier said regarding Rudolph’s chances at winning the team’s quarterback race Mueller. “Here’s an opportunity, Mason, you’ve been here, you’ve got a sense of sitting behind players, Ben (Roethlisberger) specifically. You’ve gone through this system. Trubisky comes from outside, he is relatively new, although he has got some experience, but it’s up to you to be able to take charge and say, okay, fine, I want to become the starter. What do you have to do to be able to do that?”

The Steelers’ three-way competition initially appeared to be a two-man battle between Trubisky and Pickett, with Rudolph being possibly traded at some point. However, it appears that Rudolph has earned the coaching staff’s consideration for the starting job this summer, earning some first-team reps in training camp.

Rudolph, who the Steelers had a first-round grade on in the 2018 NFL Draft, seemingly has a chance to compete for the starting role this summer. His tenure with the Steelers thus far has been uninspiring, and he is far from a fan favorite. However, context matters, as while playing behind veteran quarterback Ben Roethlisberger, Rudolph did not have the luxury of a full offseason with a chance to compete for a starting position.

Rudolph has started ten career games and has a 5−4−1 record, 61.5% completion rate, 16 touchdowns, and 11 interceptions. It is important to mention that eight of his ten starts were in 2019 under former Offensive Coordinator Randy Fichtner. Rudolph’s 2019 season was riddled with injuries to himself and other offensive players, and schematic uncertainty, among other obstacles. If one thing is for sure, it is that this offseason will provide the Steelers with a better environment to see what they have in Rudolph.

This coming season is expected to showcase the unfiltered version of Offensive Coordinator Matt Canada’s offense. An established offensive scheme will improve upon the previous uncertainty, giving Rudolph a more communicative environment to compete in. As Bleier highlights, this is also where Rudolph’s experience with the Steelers has to play to his advantage, as it may be the only thing that plays in his favor while competing against a free agent signee and top-3 pick in Trubisky and the team’s first-round selection in Pickett.

From the team’s recently released depth chart to his having the most training camp snaps, all signs currently suggest that Trubisky is being treated as the team’s de facto starting quarterback. That said, it is still early, and the Steelers have never been afraid to start the player that earns the job rather than the ‘presumed’ starter. A fringe example of this was the Steelers choosing undrafted free agent long-snapper Kameron Canaday over draft pick Colin Holba a few years ago. All of this is to say, do not count Rudolph out, as it would not be unorthodox for the team to start him, granted he is outperforming the competition.