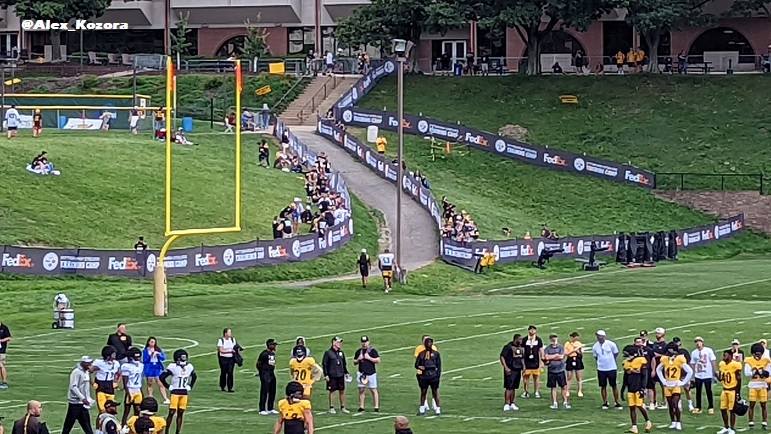 The Pittsburgh Steelers’ Monday training camp practice is now underway at Saint Vincent College in Latrobe, and unfortunately there is an early injury to pass along that bears watching.

According to our own Alex Kozora, Steelers guard Kendrick Green was injured during the first play of the seven-shots period. Green’s injury might be to his left hand or wrist. Kozora reported that he went up the hill to the locker room to get treatment and then returned to the field a short time later. He came back in team drills as the second team left guard.

Green started at left guard in the Steelers’ Saturday night preseason game against the Seattle Seahawks, and the former third-round draft pick out of Illinois did not have a great showing in that contest. Green played 35 offensive snaps in that game.

As a rookie, Green opened the 2021 season as the Steelers’ starting center, and that wound up being a disaster for him. He was ultimately benched late in the 2021 season in favor of J.C. Hassenauer. The Steelers decided to move Green to left guard this past offseason, as that was the primary position he played in college.

The Steelers did get some good news on Monday, however, as guard Kevin Dotson returned to practice after missing several days with an ankle injury. That injury prevented Dotson from playing in the Saturday night preseason opener against the Seahawks.

After Green went down injured on Monday, Dotson replaced him at the left guard spot.

Steelers head coach Mike Tomlin is likely to update the status of Green after the Monday practice concludes.