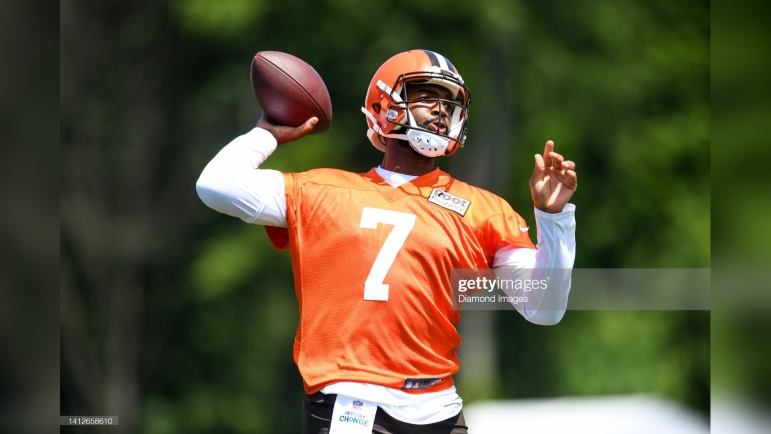 The Cleveland Browns know that they will not have their intended starting quarterback, Deshaun Watson, on the field for at least the first six games of the season. Joint disciplinary officer Sue Robinson handed down a six-game suspension for him, and his party and the players union did not appeal.

The NFL did, however, and now it’s up to their side to determine how long his suspension will actually be. The league originally petitioned for an indefinite suspension of at least a year. Any ruling, however, could be legally challenged, in theory, yet even so, there is no meaningful chance that he is on the field before week seven.

In comes Jacoby Brissett, whom the Browns signed this offseason to be their backup to Watson. And there’s a fair chance that he is going to be their starter for most, perhaps even all, of the 2022 season. He’s ready for whatever circumstances are thrown in his path.

“It’s nothing that I’m unfamiliar with”, he told reporters of playing the role of spot starter and emergency starter, as when he was traded to the Indianapolis Colts as a second-year player to take over for an injured Andrew Luck. “I’m always ready to go when my number is called, and that’s the case in this point now”.

A former third-round draft pick out of NC State by the New England Patriots, Brissett has started 37 of 60 games in his six-year career, going 14-23 in the games in which he was the starter of record. He went 2-3 most recently in five starts with the Miami Dolphins last year.

His spot-starting career began early, as a rookie, when Tom Brady opened the 2016 season serving a suspension. Jimmy Garoppolo was playing well in his absence, but suffered an injury in the process, at which point he was called upon to finish out the game in week two, and then to start a week later, both victories.

Of course, the 2019 season was the most notorious of his playing time. That was when Luck abruptly retired just before the start of the season, leaving the Colts with Brissett as their full-time starter. He did manage to go 7-8 for his troubles, throwing for nearly 3,000 yards with 18 touchdowns to six interceptions. While he’s not necessarily a ‘running quarterback’, he does have 13 rushing touchdowns on just 178 career attempts for 653 yards.

Thus far, the Browns have continued to employ Watson as their first-team quarterback during training camp, even after the initial ruling went down, but they will obviously have to adjust to get Brissett the snaps needed for him to be ready to go for the season opener—and perhaps for much, much longer after that.