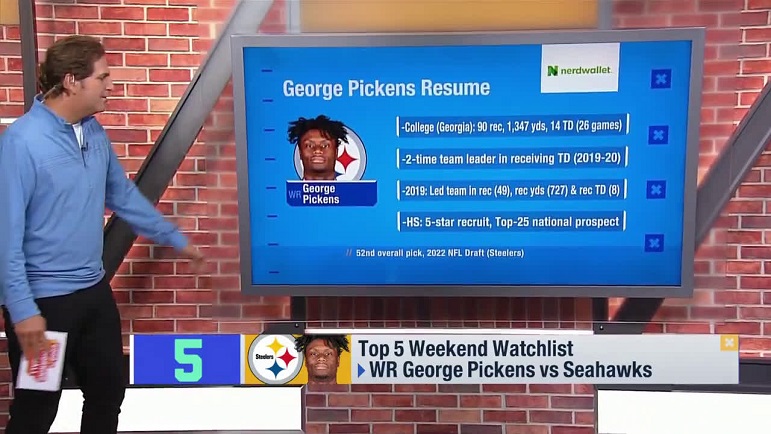 Two days from now, Pittsburgh Steelers rookie wide receiver George Pickens will get a chance to showcase his talents to a national audience at Acrisure Stadium against the Seattle Seahawks. So far in training camp he’s showcased to Steelers fans and media in attendance his immense talents, turning it into the George Pickens Show seemingly day after day on Chuck Noll Field.

That’s caused the hype train to leave the station in a hurry for the second-round pick, who looks like the next great Steelers receiver in a long line of them. He has all the tools necessary to be the next great one with his impressive hands, leaping ability, play strength and speed. His arrival onto the scene in training camp has the NFL world buzzing, and has Good Morning Football co-host Peter Schrager eagerly anticipating his NFL debut Saturday against the Seahawks on NFL Network.

On Thursday, Schrager listed Pickens as one of his top 5 players to watch in the preseason this weekend, highlighting Pickens’ great start to training camp and the headlines he’s generating.

“Steelers second-round pick and camp sensation, Mr. George Pickens. Speed Demon is right. George Pickens led the Georgia Bulldogs as a freshman and in just about every statistical category. Then the COVID season happened and then he had an ACL injury. He’s a second-round pick, and what’s he done in the last 10 days? Basically taking Pittsburgh by storm,” Schrager said on his segment on Good Morning Football Thursday, according to video via NFL.com. “Is this Lynn Swann? Is this Hines Ward? The way we hear George Pickens’ name talked about it’s as if this guy is tearing up Latrobe. Yeah, alright.

“Two-time leader in receiving touchdowns. We mentioned that he’s a 5-star recruit, a top 25 national prospect. He’s going to be in pads and he’s going to be playing on Saturday night. It’s on NFL network. They play the Seahawks. George Pickens: is the hype real or not?” Schrager added, according to video via NFL.com. “We didn’t hear a bunch about him in the draft process because of the injury. Then he gets drafted in the second round. Everyone’s like George Pickens, second round, mm-hmm, and now just lighting things up. Cannot wait to see what he actually does on the field.”

Pickens is taking Pittsburgh by storm, quickly becoming a fan favorite for his play style and ability to produce time and time again, at least in training camp. It’s an important caveat though that it’s just training camp right now. He’s going against the same players day after day and hasn’t even truly stepped between the white lines for a real NFL game yet.

That’s where the ultimate test will come, but so far he looks like the real deal. It’s hard to not get excited about the plays he’s making or how he looks overall flying through the air to make plays on the football. It’s even more exciting knowing he was a second-round pick in a deep, talented wide receiver class in which he likely would have been the top guy off the board at the position without the medical red flag from the ACL injury, and some sort of concocted off-field questions.

Pickens falling to No. 52 overall in April has greatly benefitted the Steelers so far. We’ll see if he can continue to carry his high level of play over from training camp in Latrobe into real NFL action, starting on Saturday against the Seahawks in the preseason.