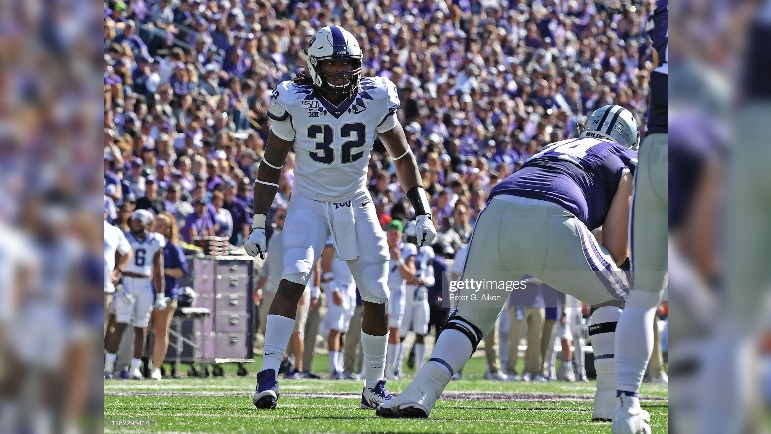 Every week in lead up to the slate of college football games, we will be highlighting several college football prospects in each matchup that project to be sought after in the 2022 NFL Draft and specifically how they may be viewed by the Pittsburgh Steelers.

The college football season kicks off oversees Saturday with two Big Ten teams doing battle in Ireland. Northwestern and Nebraska both look to start off conference play on a high note as they fly back over the pond with a win. When it comes to college prospects for Northwestern, the headliner is OT #77 Peter Skoronski. The true junior may be considered slightly undersized at the tackle position (6’4, 315lb), he plays with great technique and footwork. He is quick out of his stance and can set the depth of the pocket with a natural pass set. He is fluid out in space and in the second level as a run blocker and has the lateral movement skills to mirror pass rushers in pass protection.

Peter Skoronski is in the running for OT1 in this draft class and heading into the 2022 season.

Skoronski was named first-team All-Big Ten last season and is currently looked at as one of the top OT prospects in this draft class.

For the Cornhuskers, all eyes should be on EDGE #32 Ochaun Mathis. Mathis is a TCU transfer who plays with quickness, power, and violent finish as a pass rusher off the edge. He is comfortable lining up in a 2-point stance as a rush outside linebacker and has an explosive first step on the snap of the football. He has a fair amount of bend to turn the corner with the burst and closing speed to track down opposing QBs in the pocket like a lion hunting down its prey.

He has played in 38 games in four seasons at TCU, including starting each of the Horned Frogs’ 34 games the last three seasons. He was a second-team All-Big 12 selection in both 2020 and 2021 and recorded 135 tackles, 30.5 tackles for loss, 15.5 sacks and four pass breakups. Should he get off to a fast start against a prospect like Skoronski, Mathis could see his draft stock take a leap early in 2022.

The Nevada Wolfpack take on the New Mexico State Aggies in a night game to kick off their respective seasons. The Wolfpack saw a plethora of offensive talent leave for the NFL including QB Carson Strong, WR Romeo Doubs, and TE Cole Turner this spring, but still have prospects on the offensive side of the football. One of those prospects is OT #65 Aaron Frost. Frost played RT for Nevada last season and protected Strong in the pocket, showing a mean streak as a blocker that seeks out contact. He is nasty as a run blocker and is aggressive as a pass blocker as he looks to get hands on you quickly and impose his will with his strength.

Was trying to watch some Carson Strong film but my eyes kept going to this RT Aaron Frost mauling defenders on the edge!

He’s got some heavy, functional hand use… Wants to punch you through the wall and if he gets hands on – wants to finish you! @NevadaFootball pic.twitter.com/2ejk5kJHsn

Standing at 6’5, 310lb, Frost has the size and frame to play tackle in the NFL but is said to have 32” arms and lacks fluidity in his movement as more of a mauler type. Thus, Frost’s best fit may be inside at guard at the next level, but Saturday’s contest could show if he has been working on maximizing his strengths while minimizing his weaknesses.

The Cowboys travel east to face off against the Fighting Illini Saturday afternoon. The player to watch in this game for Illinois is RB #2 Chase Brown. The 5’11”, 205lb RB tallied 170 carries for 1,005 yards and five touchdowns and caught 14 passes for 142 yards.  A smaller back, Brown has some juice to get to the outside and attack defenses on runs to the edges. He plays with quick feet and can hit the hole decisively once he sees it, having the burst to break off explosive runs. He will have to prove he can stay healthy after dealing with several injuries during his college career, but Brown has an NFL skill set as a potential sleeper at RB in this draft class.

For Canadian football fans that actually enjoy touchdowns, may we present Chase Brown.

The Illinois RB from London, Ont. had 26 carries for 257 yards and 2 touchdowns, including this 80-yarder, against Charlotte today. #CanCon
pic.twitter.com/QEOWG2VWxB

What are your thoughts on games this upcoming weekend and the prospects listed above? Who do you think would be potentially a good target for Pittsburgh in the 2023 NFL Draft? Who else will you have your eye on this weekend? Please leave your thoughts in the comments section below and thanks again for reading!