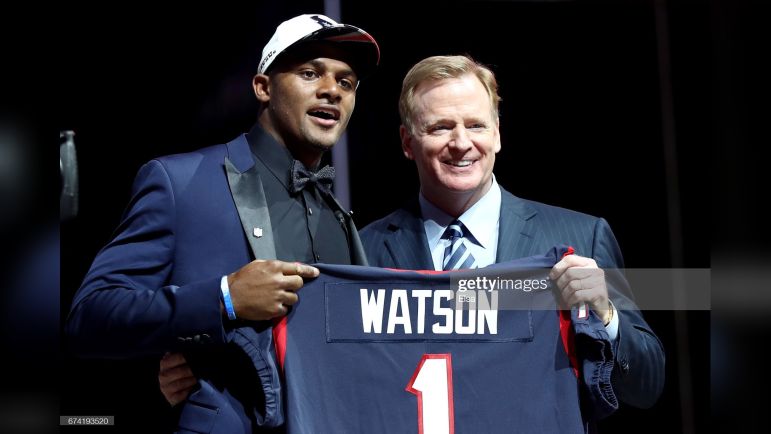 While attending a Tuesday league meeting that was centered around formally approving the Denver Broncos’ new ownership group, Goodell was asked to comment on why the NFL decided to appeal Robinson’s decision and why the league is seeking a suspension of at least a year for Watson.

According to multiple reports this past week, the league appointed former New Jersey attorney general Peter C. Harvey to oversee the NFL’s recent appeal of Watson’s suspension. Goodell went on to say during his comments on the matter that he does not know when Harvey will deliver his ruling.

In a recent 16-page report, Robinson issued the six-game suspension, writing that “the NFL carried its burden to prove, by a preponderance of the evidence, that Mr. Watson engaged in sexual assault (as defined by the NFL) against the four therapists identified in the Report.”

As part of that report, Robinson indicated that she believes Watson engaged in conduct that posed “a genuine danger to the safety and well-being of another person and conduct that undermines or puts at risk the integrity of the NFL.”

Additionally in her report, Robinson indicated that the NFL had recommended that Watson be suspended for the entire 2022 regular season and postseason.

Watson was accused of sexual assault and other inappropriate conduct during massage sessions in civil lawsuits filed by 25 women stemming from alleged encounters that took place between March 2020 to March 2021. Watson was still with the Houston Texans at the time those encounters allegedly took place.
.
According to multiple reports over the course of the last several weeks, one of the 25 lawsuits against Watson was dropped after a judge’s ruling in April 2021 stated that the plaintiffs needed to amend their petitions to disclose their names. Watson went on to settle 20 of the remaining 24 lawsuits in June, according to reports, and later agreed to settle three of the remaining four as well.

The Browns traded for Watson in March and promptly gave the quarterback a five-year contract worth $230 million fully guaranteed, the richest deal in NFL history for any player.

It will now be interesting to see what Harvey decides as part of him hearing the appeal. Speculation seems to be heavy that he will add to the six-game suspension ruling that Robinson handed down recently.

The Pittsburgh Steelers are scheduled to play the Browns in Week 3 and again in Week 18 to close out the regular season. Watsons all but certain to miss that first meeting between the two teams in Cleveland.

While Watson is out suspended, veteran quarterback Jacoby Brissett is expected to start for the Browns.