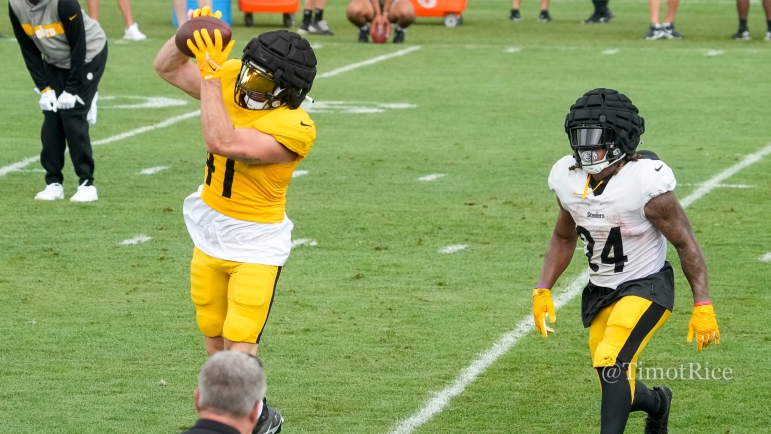 Every team in the NFL is required during this time of the year to release intermittent depth charts. Some head coaches, like the Pittsburgh Steelers’ Mike Tomlin, seem to bend over backwards in extolling their lack of virtues, suggesting that he merely cobbles them together without much thought, merely out of obligation.

Perhaps there’s some truth to it, but either way, he chose to list Devin Bush -OR- Robert Spillane as the starter at one inside linebacker position, one of only three -OR- designations along with Kevin Dotson and Kendrick Green at left guard and Ahkello Witherspoon and Levi Wallace at one cornerback spot.

What does Spillane think of the depth chart? Well, he claims not to have even seen it, but nevertheless, that doesn’t reflect upon his personal belief in his abilities to successfully hold down a starting job—one that he no doubt thought he was in line for a year ago before the team traded for Joe Schobert.

“I feel like I could be down 60 minutes out of the game”, the fourth-year inside linebacker told Mike DeFabo of the Pittsburgh Post-Gazette at the end of this week’s practices. “A hundred snaps. I never feel like there was a situation too big for me”.

Spillane made four starts in 14 games during the 2021 season, logging a total of 346 defensive snaps, that being in addition to more than 250 snaps on special teams. He played 377 defensive snaps the year before over seven starts after Bush tore his ACL and missed the majority of the season.

The former undrafted free agent has dedicated himself to becoming a complete athlete, talking to reporters about his “unorthodox” approach to training, being open to anything that is thoughtfully built around making him a better football player.

But he understands that he ultimately doesn’t make the decisions. All he can do is control what he can control, which is how much work he puts into his job and what he does on the field. “At the end of the day, who plays and who doesn’t play is up to the coaching staff”, he told DeFabo. “I leave that to them, but I’m going out here working my ass off every day”.

That’s the only attitude one can take when faced with a decision that is not yours to make. Put the work in and present your best argument for why you should be the one on the field, and whatever happens after that, you can continue on content in the knowledge that you battled.

Spillane surely knows that he is not in Bush’s sphere from a purely athletic standpoint, even after the latter’s torn ACL. But he certainly can best the high-pedigreed starter in many other facets of the game, and while he’s not trying to put anybody out of a job, he’s certainly hoping to be out there on the field as much as possible, making plays and doing what he loves, just as we all would.