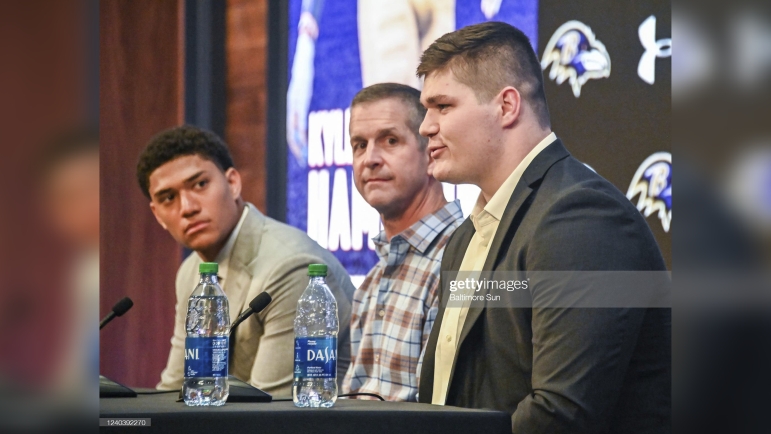 Tyler Linderbaum was one of the players that a lot of Pittsburgh Steelers fans were hoping their team would be drafting in the first round in April, seeing the need to bolster the offensive line as a top priority. They came away, instead, with a quarterback, and the center out of Iowa instead went to their division rivals, the Baltimore Ravens.

The rookie recently suffered a foot injury during practice, though it was not deemed serious. Early yesterday, Mike Garafolo and Ian Rapoport reported that Linderbaum’s injury was specifically to his Lisfranc; however, later in the day, head coach John Harbaugh directly disputed that when asked.

“That’s not true. That’s not true. It’s not a Lisfranc sprain”, he told the reporter who asked that question, via the team’s website. “There’s a ligament; it’s not that ligament. It’s a different ligament. So, he’s had the Lisfranc before. There’s no separation, there’s no Lisfranc sprain per se. That’s my understanding. I’m not a doctor, but I play one in press conferences, as you know. But that’s what I was told”.

In more relevant news than the actual location of the injury, Harbaugh also added that he was expected to miss only one to two weeks based in X-rays and MRIs on his foot conducted last week, and said that nothing had changed since then.

Reiterating yet again that “it’s not a Lisfranc”, Harbaugh described Linderbaum’s injury as a “soft tissue type of deal”, and implied that they were still going to err on the side of caution just to be sure that it heals the right way.

The rookie had been running with the Ravens’ first-team offensive line, projected as a day one starter. Patrick Mekari has been filling in a center during his absence, but they fully expect their first-round pick to be back on the field and ready by the time the regular season begins.

Mekari has made 25 starts in his career, primarily at center, though he also worked at tackle last year due to injuries at the position, and he is also capable of playing guard, so he is a utility reserve capable of being the top backup across the line.

While Baltimore expects to have Ronnie Stanley back at left tackle and the right side of the line is generally settled, as well, they are still figuring out, like the Steelers are, who is going to start at left guard. Ben Powers has taken the lead thus far, but Tyre Phillips is still in the running, as is Ben Cleveland if he can get back healthy in a timely manner.