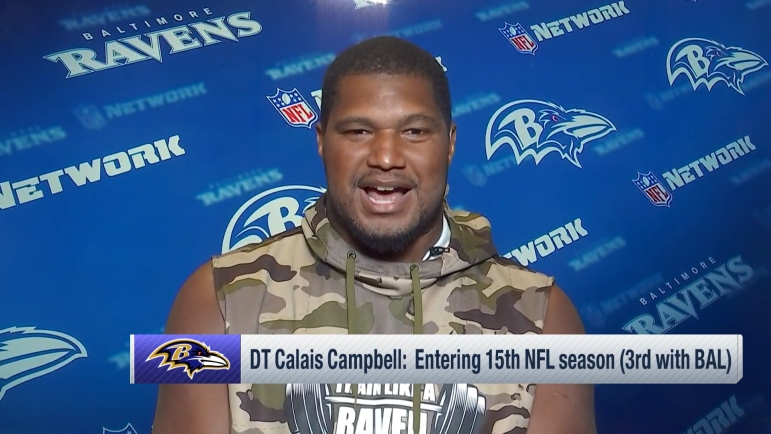 Calais Campbell was the 50th-overall pick in the 2008 NFL Draft by the Arizona Cardinals. There aren’t too many players left in the league who have been around longer. Set to turn 36 years old in a little under a month, on September 1, the former All-Pro is preparing for the 2022 season as if it will be his last.

Now, that certainly shouldn’t take anyone by surprise. After all, regardless of what position you play, when you’re turning 36 years old, you have to begin facing the possibility that every year could be your last. Only a small percentage of players ever even make it that long. Nevertheless, it doesn’t make the reality easier to accept. The 15-year veteran appeared on the NFL Network yesterday and talked about where he is at this point in his career, saying, “I’m in a place right now where I’m just taking it this year. I know I’ve got this year in me”.

When you start saying that, you tend to be near the end. You don’t hear about Cameron Heyward, for example, talking about the finish line and taking things on a year-to-year basis. Not that there’s anything wrong with that approach, but it matches a different reality, a different phase of your career.

“I don’t know if there’s anything left after that, but I’m going to leave it all on the field, empty the tank, and when it’s all said and done, after this year, I’ll reconvene in the offseason to see where I’m at”, Campbell added. “But right now, I’m preparing like this is my last year. So, I’m going to give it everything I have”.

Now in his third season with the Ravens, it is undeniable that he is no longer the same player he once was. He recorded just a sack and a half in 15 games last season, registering 49 tackles with five for loss, and one batted pass, playing over 600 snaps.

Campbell was rather generously awarded Pro Bowl recognition for his efforts during the 2020 season, which saw him finish, in 12 games, with just 28 tackles, including five for loss, and four sacks, as well as six batted passes. It was the final year of a seven-year period of making consecutive Pro Bowls.

Also a three-time All-Pro, Campbell has totaled 773 tackles in his career, including 161 for loss, with 93.5 career sacks, 14 forced fumbles, 55 batted passes, and three interceptions, with three touchdowns via fumble recovery.

One thing he hasn’t done, however, is win a Super Bowl. He did play in one, as a rookie, all the way back in 2008, the Pittsburgh Steelers being the one to topple his Cardinals at the time. He has experienced eight playoff victories, including one against Pittsburgh in 2017 as a member of the Jacksonville Jaguars, and one most recently as a Raven in 2020. But he knows this is probably his last chance. Or at least, he certainly has to act as if it is.