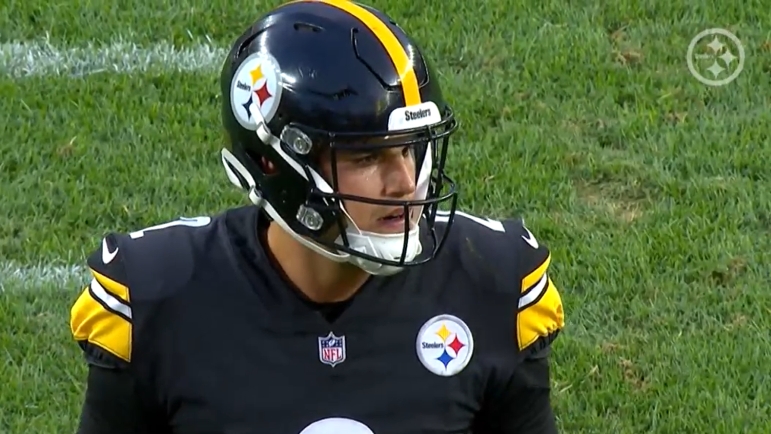 Stepping onto the field with the second stringers Saturday night at Acrisure Stadium with much to prove, fifth-year quarterback Mason Rudolph had a real opportunity presented to him against the Seattle Seahawks.

Then, that opportunity took a turn for the worst.

On the first play from scrimmage for the veteran on the night, Seattle Seahawks rookie pass rusher Boye Mafe was able to get around left tackle Dan Moore Jr. to force a strip sack of Rudolph, putting the ball on the turf. Fortunately for the Steelers, Rudolph was able to recover the ball for a 10-yard loss, but some boos started to rain down from the stands inside Acrisure Stadium just two drives after new quarterback Mitch Trubisky led the Steelers’ offense on a scoring drive.

Things could have gone completely off the rails after the fumble, but Rudolph showed great poise bouncing back, leading the Steelers on a scoring drive of his own a few plays later, showing that he should be firmly in the mix for the starting job for the black and gold.

Following the win over the Seahawks in the preseason opener for both teams, Rudolph spoke with reporters about the poise he showed in that moment, stating that his next play mindset helped carry him through that moment.

“Yeah, the D made a good play there and got the ball out. I was fortunate enough that found it right there at my feet, but I think just try to play the next play no matter the momentum swing,” Rudolph said to reporters, according to video via the Steelers Live Twitter page. “Try to focus on what’s the play, what’s the motion, what’s the coverage. Where am I gonna go with the ball and execute.”

Rudolph did just that after the fumble, finding standout rookie receiver George Pickens two plays later for a 26-yard touchdown in the back right corner of the end zone, stretching the Steelers lead to 14-0 on the night. It was a perfectly-placed throw from Rudolph to Pickens and was on time from snap to catch, resulting in the scoring play.

That connection carried over from training camp into game action, leading to a scoring drive for Rudolph, which was key in the middle of a three-way quarterback competition.

A veteran of 10 career starts in the NFL, it shouldn’t come as much of a surprise that Rudolph was able to shake off the fumble, but it does say a lot about his mental makeup and overall poise to shake off a huge mistake in the middle of a pivotal QB competition and bounce back the way he did with the scoring strike to Pickens.