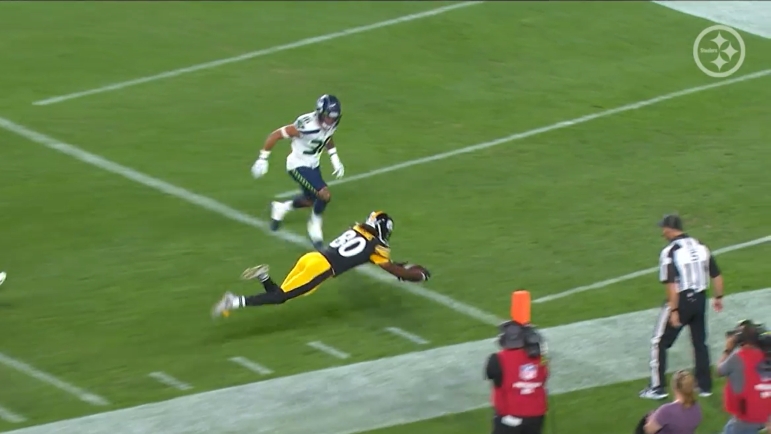 The Pittsburgh Steelers opened up the preseason on Saturday night, hosting the Seattle Seahawks at Acrisure Stadium. Pittsburgh was able to grab a win, beating Seatle 32-25 thanks to a touchdown by WR Tyler Vaughns with three seconds left.

The Steelers started the game with the ball, with RB Anthony McFarland returning the opening kickoff to right around the 26-yard line, but an illegal double-team block against WR Cody White sent the Steelers back to their own 10.

WR George Pickens caught the first pass of the game from QB Mitch Trubisky for a nine-yard gain. On third-and-one, Pickens made an impact with a nice block, helping spring McFarland free for a 24-yard gain on the ground. An unnecessary roughness call against the Seahawks put the Steelers in plus-territory at the Seattle 42.

On third-and-six, Trubisky hit WR Gunner Olszewski just beyond the first-down marker and Olszewski ran for more, picking up 25 yards to advance to the Seattle 13. On the next play, Trubisky found Olszewski wide-open in the end zone for a 13-yard touchdown. Chris Boswell’s extra-point was good and Pittsburgh took a 7-0 lead with 12:15 remaining in the first quarter.

Seattle opened up their drive at their own 26. After a seven-yard run by RB Kenneth Walker III to open the drive, and a 17-yard reception to TE Noah Fant for a first down would follow. That would be the lone first down Seattle had on the drive, and on third-and-six QB Geno Smith would be sacked by Henry Mondeaux and the Seahawks punted away.

Pittsburgh’s drive started at their 20, and Trubisky and TE Connor Heyward connected for a 20-yard gain. McFarland ran for seven yards, then nine for a first down, and on second-and-eight, Trubisky scrambled for a four-yard gain. On third-and-four, he was incomplete to Olszewski and Pittsburgh punted back to Seattle with 5:29 left in the first quarter. Cameron Nzialek punted to the Seattle 9, and they fumbled but recovered their own fumble and would remain at their 9-yard line.

Seattle went three-and-out, and on the punt, WR Steven Sims returned the punt 38 yards to the Seattle 23. On the first play of the drive though, QB Mason Rudolph (replacing Trubisky) was strip-sacked but was able to recover his own fumble. Two plays later, he threw to Pickens in the corner of the end zone who made a nice play to keep his feet in bounds and extend the Steelers lead to 13-0. K Nick Sciba knocked through the extra-point, and the Steelers took a 14-0 lead with under two minutes left in the first quarter.

On the first play of Seattle’s next drive, RB Travis Homer picked up 25 yards on a reception from Smith, and two plays later he ran for a 16-yard gain. A 10-yard gain by Homer set Seattle up at Pittsburgh’s 18, but a loss of yards on a pass thanks to a nice stick by CB Arthur Maulet, an incomplete pass, and a throw short of the sticks forced Seattle to settle for a field goal. Jason Myers hit the 33-yard field goal and the Steelers held on to their 14-3 lead with 12:50 left in the half.

After a three-yard run by RB Jaylen Warren, Rudolph made a nice play and picked up a first down on a nine-yard completion to Olszewski. Back-to-back eight-yard receptions, one to Connor Heyward and one to Pickens gave the Steelers another first down. On third-and-four, WR Miles Boykin got in on the action with an eight-yard reception of his own that took Pittsburgh to the Seattle 47.

Two plays later, Warren made a reception and broke a few tackles to gain 10 yards and a first down. Later in the drive, he ran for 13 yards and fumbled at the end of the play, but Pittsburgh recovered. On first-and-ten, McFarland came back in and ran for three yards to the Seattle 16. Pittsburgh got inside the ten on a nine-yard completion for a first down to Boykin, but Rudolph was incomplete to Boykin in the end zone on the next play. On third-and-goal from the Seattle three-yard line, Pittsburgh couldn’t punch it in as Rudolph was incomplete to Sims. A 21-yard field goal by Sciba gave Pittsburgh a 17-3 lead with 4:28 left in the first half.

An 11-yard run by Walker III opened Seattle’s drive with a first-down, but that was all they would get beyond a four-yard Walker III run as they punted after a four-play drive. P Michael Dickson’s punt went out of the end zone for a touchback.

Pittsburgh went three-and-out and Seattle would have a chance for a two-minute drill at their own 39. They would get to the Pittsburgh 7 after a 21-yard completion to WR Cade Johnson after a first down run by Homer, and on third-and-goal from the Pittsburgh 2, Smith scrambled for a touchdown and the Seahawks cut into the Pittsburgh lead at 17-10. Pittsburgh ran the clock out going into halftime, so 17-10 would be the halftime score.

Seattle opened the second half with the ball, and on the opening play, QB Drew Lock threw it short to WR Bo Melton and he ran for a 39-yard gain to the Pittsburgh 34. A first down run by Deejay Dallas brought Seattle to Pittsburgh’s 23, and on third-and-six from Pittsburgh’s 19, Lock found WR Dareke Young for a first down. Young caught a three-yard touchdown on third and goal and the Seahawks would tie the game up at 17 on the extra point.

After a touchback on the ensuing kickoff, it was Kenny Pickett time. His first pass was a completion off play-action to TE Jace Sternberger for a first down. On the next play, Sims ran for 38 yards to the Seattle 26 off a jet sweep, and then Pickett threw short to Warren for a seven-yard gain. Two plays later, Warren took a swing pass down to the Seattle 3 for a first down, and on the next play he finished it off with a touchdown reception from Pickett.

Pickett finished 5-5 for 33 yards on his opening drive. The Steelers went for two, and Pickett and Connor Heyward connected to give Pittsburgh a 25-17 lead with 6:44 left in the game.

Seattle had an 18-yard run by Dallas that got them to the Pittsburgh 46, but Seattle wouldn’t pick up another first down in the drive as they punted away from right around midfield. Sims called for a fair catch at the Pittsburgh 7, and that’s where they would start their drive.

On third-and-six, Pickett was sacked and Nzialek punted 53 yards to the Seattle 45. On the last play of the third quarter, Dallas ran for ten yards and a first down. Young had a 15-yard reception to open the fourth quarter, and two plays later Dallas caught a 17-yard touchdown. Seattle’s two-point conversion try was good, and the game was tied up at 25-25 with 13:32 left in the fourth quarter.

WR Tyler Snead got involved on Pittsburgh’s next drive, gaining two yards on a handoff and catching a pass for seven yards on the next play. On third-and-one, Mateao Durant was stopped for a loss of one and Pittsburgh punted. Nzialek’s punt was a touchback, and Seattle took over at their own 20-yard line.

Seattle quickly moved to their 47 after gains of 13, eight and six yards. A Hamilcar Rashed Jr. sack later in the drive killed the Seahawks’ momentum, and they punted from the Pittsburgh 46.

Pittsburgh picked up a first down on a run by RB Master Teague, and Teague would pick up another first down on a four-yard run later in the drive. After Tyler Vaughns picked up eight yards off a reception from Pickett, Pickett scrambled for a four-yard gain and a first down on third-and-two. After the two-minute warning, Pittsburgh couldn’t pick up the first down, and on fourth-and-one Pickett was sacked for an eight-yard loss and Seattle took over.

On the first play of Seattle’s drive, LB Mark Robinson strip-sacked Lock and OLB Tuzar Skipper recovered to give the Steelers the ball right back. With 56 seconds left, the Steelers were facing a third-and-one from the Seattle 34. Pickett and Cody White hooked up for a two-yard gain, and then Pickett scrambled for an eight-yard gain on first down.

Pittsburgh kept the clock running, and Pickett threw to Tyler Vaughns who shook a tackle and ran for a 24-yard touchdown to put them up 31-25 with three seconds left. Sciba would make the extra point to clinch the 32-25 win. Pickett finished 13-15 for 95 yards and two touchdowns in his preseason debut.

For Pittsburgh, they open up the preseason with a win. They’ll look to remain undefeated when they travel to Florida to take on the Jacksonville Jaguars.