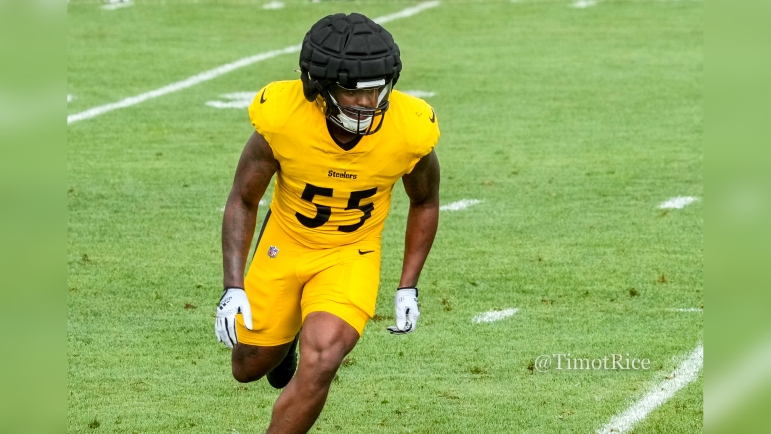 NFL training camps are often considered a standard across the league where the rubber meets the road, and where the fabric of team success is forged. It’s where roster spots and starting jobs are won and lost, and for the Pittsburgh Steelers, this is no different.

Pro Football Focus’ Doug Kyed released a list of one riser and on faller on each team, with a little help from local beat writers who cover the team. The names who made the list for Pittsburgh are not surprising, with the riser being wide receiver George Pickens, the team’s second-rounder from the 2022 NFL Draft. The distinction of faller falls at the feet of inside linebacker Devin Bush, whom the team traded up to acquire in the first round back in 2019.

Unless you’ve been hiding under a rock thus far for the duration of training camp, you’ve likely at one point heard the buzz surrounding Pickens. The 6-foot-3, 195-pounder missed most of last season for the National Champion Georgia Bulldogs, but the former 5-star recruit made it back late in the season, and largely made his presence felt. He showed off his deep-ball prowess in the SEC Championship loss to Alabama, grabbing two passes for 41 yards and a 20.5 YPC average, then scorched the same ‘Bama defense for a 52-yard bomb in the ‘Dawgs’ 33-18 championship win.

Those same ball skills have seamlessly made the transition to Latrobe, as Pickens has frequently been making eye-popping plays against the team’s starting defense. His body control and tracking ability are jumping off the page, and a former unnamed player relayed to Chris Adamski of the Pittsburgh Tribune-Review that Pickens has a lot of Randy Moss in him. After hearing reports out of camp of Pickens routinely talking trash to the defense, this Saturday’s preseason opener against Seattle should finally give us a glimpse of Pickens’ sky-high talents.

On the other end of the spectrum, we have Bush, a guy who not long ago was viewed as the future face of the Steelers defense. After losing All-Pro Ryan Shazier to a severe spinal cord injury, Bush was supposed to be “The Guy” at ILB. His rookie year, he shined, racking up 109 tackles and two interceptions, showing off the sideline-to-sideline ability that the team thought it was getting after trading up to #10 overall to draft him coming out of Michigan.

An ACL tear his sophomore year halted his progress and upon returning to the field last year, Bush wasn’t the same player. It could be due to a myriad of reasons, like the depleted defensive line unable to occupy blockers to keep him fresh, as he and fellow ILB Joe Schobert were frequently swallowed up by opposing linemen. It also could be a mental hurdle, as Bush’s read-and-react skills seemed to be stuck in the mud, and his play was also very hesitant. He’s been on-record stating the injury is sort of like getting bitten by a dog, and the fact that once it happens, you’re afraid of it happening again.

Now a year fully removed, will we see Bush’s play return to the form he showed his rookie season? Only time will tell, but the team already declined his fifth-year option earlier this offseason.

Thus far in camp, he’s frequently been splitting first-team reps with Robert Spillane, a backup player who’s seen his share of playing time due to both Bush’s injury and also his struggles last season. The team likely will give Bush every opportunity to prove their first-round investment was the right choice, as no NFL front office wants to look foolish in that regard.

I’d look for Bush to get plenty of reps in the preseason games upcoming to prove not only he deserves to be a starter alongside Myles Jack this year, but that his next contract deserves to be in the Steel City.