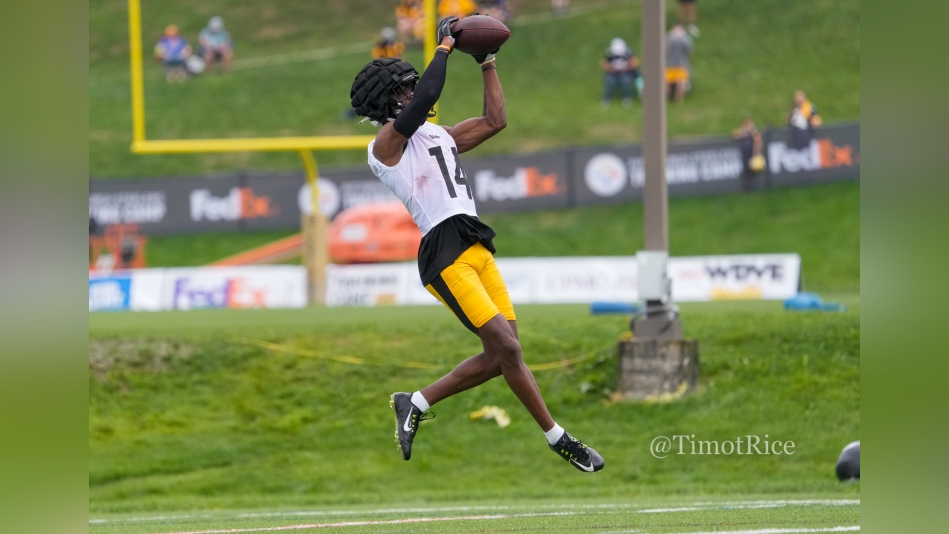 Second round wide receiver George Pickens has been the most highly-touted Pittsburgh Steeler of the summer, wowing with highlight reels plays throughout training camp and carrying those moments over to inside stadiums. Pro Football Talk’s Peter King was one of many in the national media to make the trek to Latrobe and watch Pickens in person. Needless to say, he came away impressed, and in his Monday Morning column, believes Pickens could be the de-facto #2 receiver on this team. Here’s what he wrote:

“6. Worst-kept secret on the camp trail: Steelers WR George Pickens. King of the contested catches at Pittsburgh camp. I won’t be surprised if he gets more targets than Chase Claypool, though I don’t know which quarterback will be throwing the majority of those balls.”

Pickens was the Steelers’ top receiver of the summer, leading camp in yards and touchdowns. His strong start perhaps quieted off a little but but his talent and upside are undeniable. Chase Claypool’s summer was far bumpier, playing well when healthy but missing large chunks of the summer. He suffered a right shoulder injury and missed about a week, returned, bowed out of the lineup again, and then missed yesterday’s preseason finale against the Detroit Lions. When all have been healthy, Pickens and Claypool have played together in 11 personnel but rotated in two-receiver sets.

Diontae Johnson is firmly entrenched as the team’s #1 receiver and will log the most amount of snaps. To King’s point, Claypool and Pickens could see similar levels of production. Assuming he’s healthy, Claypool is still the better bet for more targets. His work in the slot should naturally lends itself to more opportunities. Pickens will be more of a feast/famine player to win downfield, likely making his numbers inconsistent, but his role and impact could increase as the season moves along.

Of course, King must make mention of the team’s uncertain quarterback situation over the course of the season. Mitch Trubisky is set to be the team’s starter out of the gate but it’s unknown how long he’ll hold off rookie Kenny Pickett. Should the Steelers be competitive, Trubisky may play most, if not all, the season. But if the team struggles, calls for Pickett will come quickly. Mike Tomlin is a veteran-enough coach to block out that noise but there’ll be an unavoidable reality in front of him – play the rookie quarterback who has earned the right to see the field. It’s one of many storylines facing the team this summer, and arguably its biggest question.