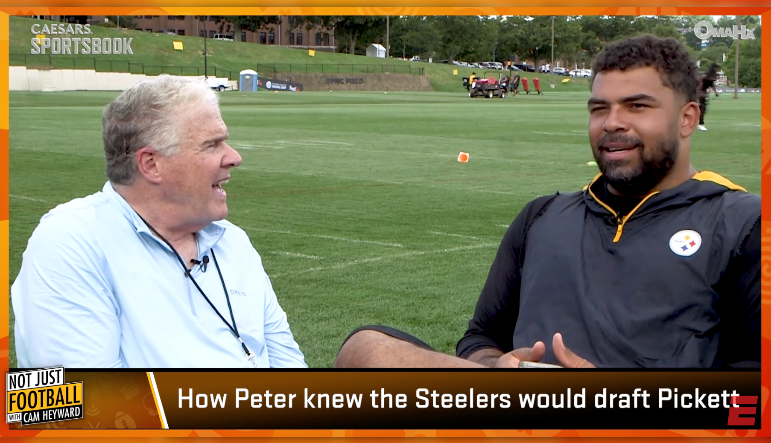 Roughly five months ago, all the buzz surrounding the Pittsburgh Steelers ahead of the 2022 NFL Draft had much to do with the infatuation with Liberty quarterback Malik Willis permeating from many members of the Steelers’ organization. From the large contingent sent to Blacksburg, Virginia for Willis’ Pro Day, to the pre-Pro Day dinner with Mike Tomlin, not to mention the heavy interest at the Senior Bowl in Mobile and the Combine in Indianapolis, it was pretty clear to observes that the Steelers were hot on the tail of Willis.

Instead, once they were on the clock on the night of April 28 for the draft in Las Vegas, the Steelers stunned many, selecting the University of Pittsburgh quarterback Kenny Pickett with the 20th overall pick with all the quarterbacks still on the board. It surprised many, except for NBC Sports’ Peter King, who was one of the few who consistently connected the Steelers and Pickett for more than just the shared facilities and same towns.

Appearing on the “Not Just Football with Cam Heyward” podcast this week from Saint Vincent College in Latrobe, Heyward asked King how he knew the Steelers were going to draft Pickett over Willis before anyone else. King, to his credit, kept it pretty simple and said it had much to do with being able to pick up the bread crumbs leading up to the draft, and trusting a source within the organization.

“It’s the old, classic case of, ‘if I told you, I’d have to kill you,'” King joked with Heyward from Chuck Noll Field, according to video via ESPN’s YouTube page. “But I don’t think I could kill you…you look impenetrable. I think it would be difficult…but somebody just told me don’t buy the Malik Willis hype, and so then I asked about Kenny Pickett and I got a ‘no comment.’

“Around the time of the draft, you look for clues, you look for little pieces of bread crumbs on a path. That’s what you look for,” King added, according to video via ESPN’s YouTube page. “Most of the mock drafts are exactly what they are. They’re a mockery of anything, but I don’t know, most of the time you make a best guess. Most of the time I’m wrong and I just happened to be right on that one.”

Just three days prior to the 2022 NFL Draft, King dropped his final mock draft and had Pickett going to the Steelers at No. 20 overall. He was one of the very few that had it that way in his mock, and it’s because of the bread crumbs and the information he was able to pick up leading up to the draft.

In hindsight, that connection should have been easier to make regained the Steelers and Pickett, considering former GM Kevin Colbert essentially described Pickett when talking about what he looked for in a quarterback, and also name-dropped Pickett in a press conference, praising him for the season that he and the Panthers had, which never happened before leading up to a draft for Colbert in 22 years.

The Steelers are thrilled to have Pickett moving forward, as he was very clearly their top quarterback in the class. Now, it’s all about developing him in to the next franchise quarterback for the black and gold.