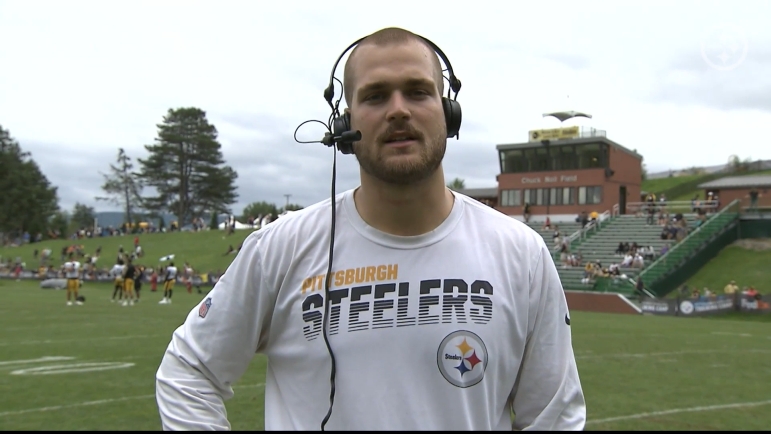 It may have taken a bit longer than expected in training camp at Saint Vincent College in Latrobe for the pairing of tight end Pat Freiermuth and rookie first-round quarterback Kenny Pickett to hook up in the passing game, due in large part to Freiermuth’s injury, but on Monday in a surprising padded practice just two days removed from a preseason game, the connection that the Pittsburgh Steelers hope happens time and time again to the tune of great success hooked up for some offensive magic Monday in seven shots.

After working out together at times in the offseason in New Jersey, Pickett and Freiermuth showed some of the developing rapport and trust in Monday’s seven shots session as Pickett lofted a perfectly-thrown ball to Freiermuth, who skied over reserve safety Donovan Stiner to haul in the score, getting the offense back on track in the seven shots format.

Following Monday’s practice, Freiermuth spoke with Steelers.com’s Missi Matthews for the team’s Inside Training Camp Live segment. Freiermuth discussed the touchdown catch from Pickett, joining that it was about time the Pitt and Penn State connection got going in the final week of training camp.

“Just singled me up outside and Kenny threw a great ball and made it easy for me to make a play,” Freiermuth said to Matthews, describing the play in seven shots, according to video via Steelers.com. “It’s good to finally get the Pitt and Penn State connection going.”

Throughout the offseason in New Jersey, the Pitt and Penn State connection put in the work, with Pickett trying to get up to speed in the Steelers’ offense, and Freiermuth trying to get a jump on learning the nuances of his future signal caller in the black and gold. Though it happened only a few times, the two getting together outside of the facility to work was a great development for the future of the Steelers’ offense, especially with those two likely holding down prominent positions moving forward.

Kenny and Pat are gonna be a problem. End zone and up the middle of the field pic.twitter.com/jbDqEvVceb

“His girlfriend lives about fifteen minutes from where I’m from, so when he was in town, I was like, we’ll definitely get together and we’ll train. So that was awesome. And I think, you know, a couple summers down the road now we’ll be able to link up together in Jersey and train a little bit,” Pickett said in a interview during Training Camp posted to Steelers.com.

It’s a good sign that Pickett and Freiermuth were able to get together and work out away from team activities over the summer. Not only does it help the two of them improve and build chemistry between the presumed QB of the future and his starting tight end, but it helps build team chemistry as a whole. Getting guys on the same page and ready to work together even during their breaks in the offseason helps the team as a whole get stronger and improve, and Pickett and Freiermuth taking an active role in doing so is a promising sign for the young offense.

While that work didn’t quite pay off right away in training camp due to Freiermuth’s hamstring injury and Pickett’s reps with the third team, it feels like it’s starting to pay off now, especially with Monday’s connection in seven shots. Hopefully the Pitt-Penn State connection in the black and gold has real staying power, unlike the once-prominent rivalry in Western Pennsylvania.