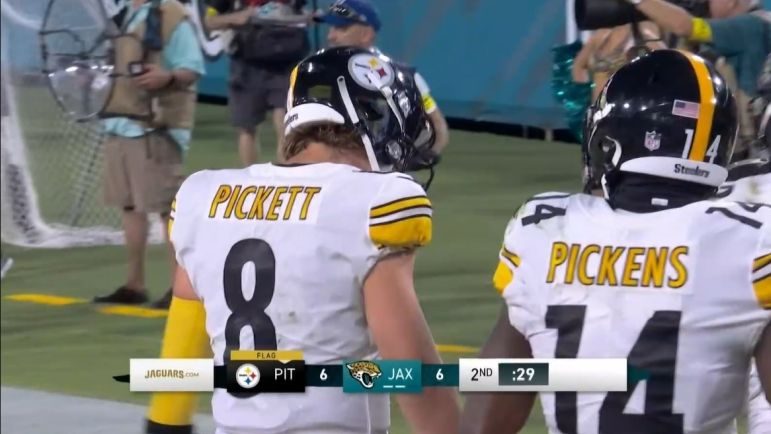 The NFL world might be surprised by Kenny Pickett’s immediate summer success. But those who have worked with him every day aren’t. Speaking to reporters after the game, TE Pat Freiermuth and WR Diontae Johnson said nothing Pickett’s done so far – impressive as it might be – has surprised them.

“Kenny shows it in practice all the time,” he said via the team’s Around The Locker Room segment. “We do two-minute all the time. I think Kenny’s developed nicely.”

Pittsburgh routinely reps two-minute drills to end practice, embodying their situational focus during camp. Third down, high/low red zone, goal line, working out of their own end zone, and two-minute, much of the 11v11 periods in camp have an element of situational ball. Pickett’s gotten plenty of reps there and has had success that’s now translating to stadiums. He led a beautiful drive to close out the first half, quickly marching the offense 63 yards into the end zone.

Freiermuth was one of his favorite targets, catching two passes for 35 yards on the drive. That included a gorgeous 24-yard completion Pickett made in the face of pressure, leading Freiermuth downfield past the linebacker but ahead of the safety for a chunk play. It combined toughness, anticipation, and accuracy/touch in one play.

Kenny Pickett anticipating and leading Pat Freiermuth with a free rusher right in his face…whew. Heck of a throw. #Steelers pic.twitter.com/o4hcSUnTU8

Pickett’s day would be done after that drive, a job well-done.

Johnson agreed with Freiermuth, noting what Pickett did in Jacksonville was what he’s done in Latrobe throughout the summer.

“I feel like he was comfortable out there real comfortable. Showed that he can get us down the field in that two minute drive period. That’s something we were working on throughout camp the whole time… he just looked relaxed and like he’d been there before.”

Pickett was deemed the most “pro-ready” quarterback of the draft, one of the few universally agreed assessments in an otherwise jumbled up quarterback class. He was Pittsburgh’s top-rated quarterback, proven by the fact Pickett was the first passer taken in this year’s draft. All the things the team talked up, his accuracy, IQ, leadership, and poise, have carried over from his college days. Mitch Trubisky is still likely to be the team’s starter but if he falters, the calls for Pickett will come quickly and intensely.