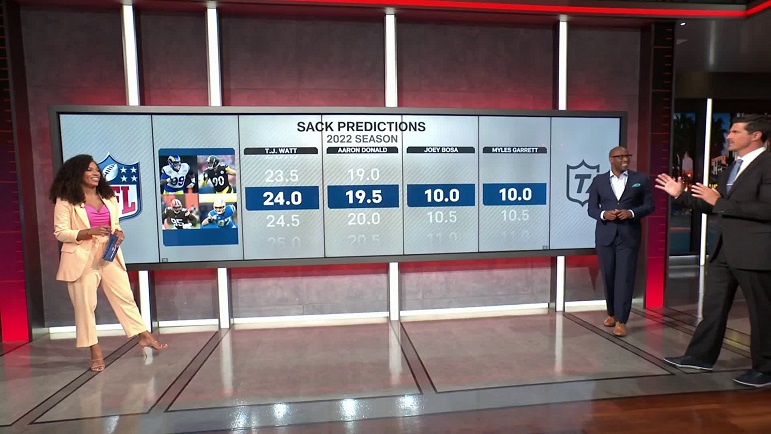 Last season, Steelers star pass rusher T.J. Watt was several questionable calls away from outright owning the single-season sack record of 22.5 he tied last year with Giants Hall of Famer Michael Strahan. If not for an iffy roughing the passer penalty on Cam Heyward that erased half a sack, and the infamous “aborted play” by Ravens quarterback Tyler Huntley that ruled out a full one, Watt would’ve had the record all to himself. Or how about the two full games, and halves of others that he missed during the 2021 season due to injury? It was not in the cards though, but he did capture his first (arguably his second straight) NFL Defensive Player of the Year Award.

Well, according to NFL Network Analyst and former NFL QB David Carr Tuesday night on NFL Total Access, the ’22 season is going to be one that will see Watt take his game up another level, which should be a terrifying thought for NFL offensive coordinators across the league. Carr and co-NFL Network Analyst Bucky Brooks made their predictions on who has the best shot this season to break the sack record, and the four names atop their charts were Aaron Donald, Joey Bosa, Myles Garrett and Watt.

Here are all of the sacks this year registered by T.J. Watt #Steelers pic.twitter.com/Ay62w3bI2R

Brooks started off the segment giving Donald 20 sacks, stating that part of racking up sacks is having a good offense that puts your defense in prime opportunities, which the Rams offense is certainly capable of. However, Carr sided with Watt, handing him 24 sacks and stating he’s going to have an eye of the tiger-like drive and hunger to go get it, after being so close he “could taste it.”

“I think they have a better team, and you mentioned something earlier to me that makes a lot of sense, you’ve gotta be up in games to get sacks,” Carr said, alluding to Brooks’ take, according to video via NFL Network. “Twenty-four sacks for T.J. Watt, go back and just watch, he’s not even a guy that’s pass-rushing on every snap. But when he is pass-rushing, he’s giving it everything he has, he’s being double-teamed, he’s ducked under, he’s using power, he’s using a multiplicity of moves that he learned from his older brother. T.J. Watt breaks the sack record, and it’s gonna be a fantastic season for the Pittsburgh Steelers.”

It remains to be seen if the team will actually be better, as the offense is undergoing a changing of the guard, shifting from a future Hall of Fame QB in Ben Roethlisberger to Chicago castoff Mitch Trubisky, or the team’s first-round pick this past April, Kenny Pickett. However, the defense looks to be stronger, as the depth of the defensive line appears to be rectified, which will hopefully cure the woes of the run defense from last year. Several free agent signings like Larry Ogunjobi, Myles Jack and Levi Wallace will be integrated into the unit that undoubtedly will be looked upon to help guide the team, and Watt is without a doubt the straw that stirs the drink on that side of the ball.

His sack trajectory has gone up every single season since his rookie year, going from .47 per game to .81, .91, 1 and 1.5 last year, even factoring in the two games he missed. If we extrapolate those numbers from last year to the full 17 games, he would’ve had 27 sacks. We will see what kind of jump in production he can make this year, but clearly count Carr on the bandwagon. Let me know your thoughts on Carr’s take in the comments below.