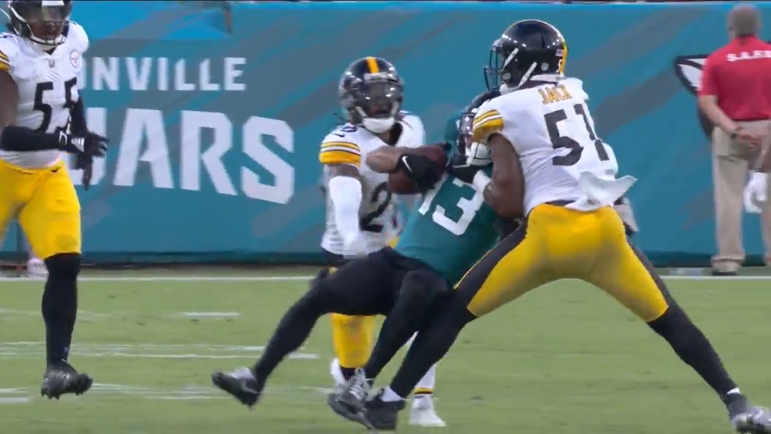 That the Steelers’ defensive line room has talent is undeniable. Whether or not they can play at a consistently high level as a cohesive unit is what remains to be seen. But part of that is just putting all of the pieces together and giving them the team to form those necessary bonds that allow them to play as a collective rather than a collection of individuals.

There was a little bit of good and bad in last night’s performance for newcomer Myles Jack, the veteran inside linebacker they signed as a free agent to a two-year, $16 million contract, who saw his second game of action in the defense, noting that the possession downs are what most needs work.

“I think it’s good. We’re getting them in third and longs, great opportunities. We just have to close out on those third downs”, he told reporters after the game, via the team’s website. “I feel like we’re winning in the first and second downs. It’s just those third down we have to get off the field. That’s something I’m sure we’ll work on, but at the end of the day, we’re bending and not breaking and giving up threes, so it’s not bad”.

A former second-round draft pick of the team he played last night, the Jacksonville Jaguars, Jack was a salary cap casualty this offseason, so the Steelers pounced on him, ironically adding him to replace another Jaguars linebacker whom they acquired via trade a year ago in August, Joe Schobert, whom they released after the March signing.

He is being prepared to be the Steelers’ mack linebacker, including wearing the green dot, with Devin Bush and Robert Spillane ostensibly competing for playing time next to him. Bush continues to be the primary starter alongside him, but they have worked various combinations—including different linebackers as the dime linebacker—in practice.

Outside of changes along the central interior, there is also Larry Ogunjobi as a newcomer on the defensive line, and Levi Wallace at cornerback. Ahkello Witherspoon is also entering his first full season with the team, now as a starter, and Damontae Kazee is another possible contributor in his first year with the Steelers.

Of course, we haven’t seen much during the preseason from T.J. Watt (though he did have a sack), Minkah Fitzpatrick, and Heyward, their trio of All-Pros, so we certainly can’t fully evaluate what this unit looks like without them out there. But getting off the field on third down is definitely an area in which there is room for improvement.