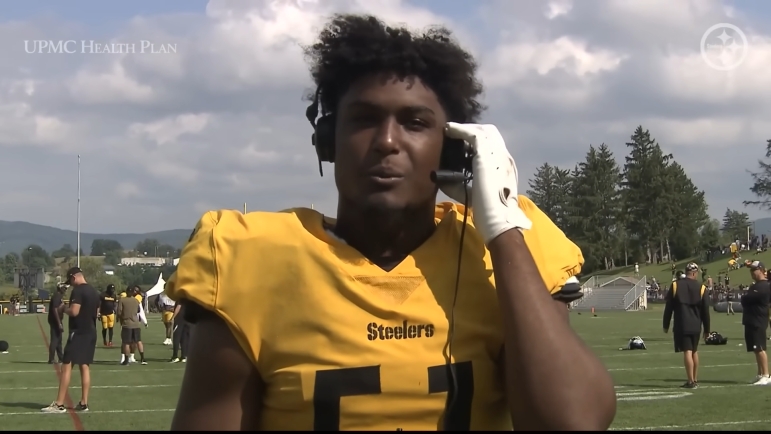 The Pittsburgh Steelers drafted Devin Bush 10th overall. They just paid Myles Jack $16 million—or at least, have agreed to pay him an average of $8 million over the next two seasons. These are guys who are expected to play.

So why does Robert Spillane keep popping up in the rotation during training camp? What exactly is the plan there? Head coach Mike Tomlin has been typically opaque when it comes to offering conclusions. But Spillane is one of the group’s been-there, done-that guys at linebacker, and Jack welcomes his participation on and off the field.

“It’s been good. Coach has been keeping a cool rotation, keeping us fresh”, he said yesterday, “just allowing us [to take a rest]. I’ve been learning from those guys. They’ve been here for four years. Defense is defense, but there’s just little intricacies that I’m trying to figure out and pick up on as we get live. They’ve been great, they’ve been helping me, and it’s been fun. I think we’re gonna have a very deep group”.

Though not drafted by the Steelers, nor, indeed, drafted at all, Spillane has been in Pittsburgh for going on four years now. He looked to be heading for a shot at a starting job in 2021 before the team made the trade for Joe Schobert.

Now swapping out Schobert for Jack, Spillane hopes to continue to maintain a role on the defense. While he did not get the opportunity to be a starter last season, he did serve in a sub-package role. He can perhaps do the same this year, or simply serve as a rotational player.

Or his lining up with the first-team defense now could simply be to, as Jack said, give the starters some rest, and to give Spillane himself some work. He would still be the next man up, at either position, in the event of injuries.

Really, this is always part of the fun, as well as the frustration, about training camp. Trying to ascertain what developments mean that we see on the field, or if they have any meaning at all. Why is Spillane with the ones? Is he being given a shot to compete to start? To have a sub-package role? Or simply to shake things up in practice a bit and break up the monotony?

Tomlin rarely allows us to settle into a concrete answer, and really, he shouldn’t. As much as we might want to know, it doesn’t benefit the team at all for such things to become a part of the narrative. Fan curiosity is not a good enough reason to volunteer unnecessary answers.

But the answer is usually the simplest one in the long run. Most likely, Spillane is just getting some work in because he might need to play here and there. It’s certainly nothing we haven’t seen in training camps past, but since Jack was asked about it, and Tomlin has talked about it, here we are discussing it.