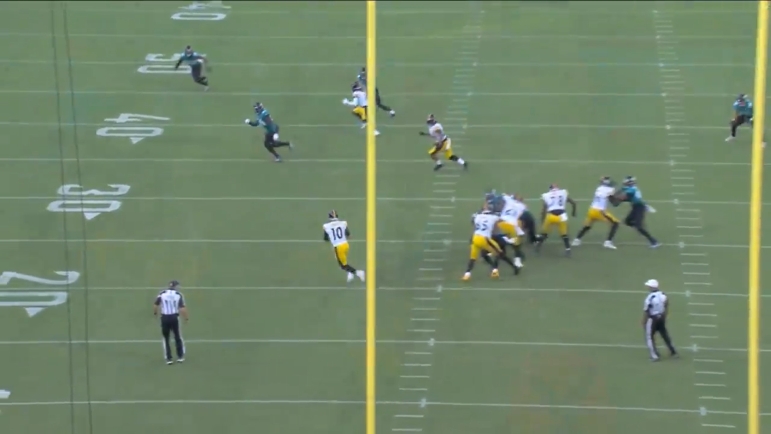 Pittsburgh Steelers quarterback Mitch Trubisky took slightly more snaps than the other quarterbacks in training camp this past month. He has started each of the first two preseason games. But that has only amounted to five drives’ worth of play thus far, and he’s found himself after each game hoping to play more.

That is his desire for Sunday’s preseason finale, in no small part because he sees elements within the offense that have to come together through more play on the field. He talked to reporters yesterday specifically about the offense adjusting to his mobility and scrambling capability and how to read off of that, noting the second play of the game in which he and Diontae Johnson were not on the same page.

“You’re just trying to keep plays alive, and I think that’s one of the improvements [we can make]. It’s a good thing to keep plays alive, but you’ve also got to take advantage when you get behind the defense like that”, he said. “I would’ve liked to hit that one early in the game where I got Diontae behind the defense and we kind of weren’t on the same page where he was going versus where I was throwing”.

You can see the play in question above from the all-22 perspective. Trubisky was quickly under duress, scrambling out to his left and looking down the left sideline in Johnson’s direction. The receiver, running an in-breaking route, puts the breaks on when he sees his quarterback flush left and soon turns upfield. So far, not so bad. But as Trubisky aims for the numbers, Johnson breaks for the hashmarks, and the pass falls incomplete.

Now, not being on the same page doesn’t mean one person was wrong and one person was right. It just means that the two were not thinking the same thing, and in order to learn the way one another thinks, you have to be together in the relevant environment.

How does Trubisky play off of a scramble? Where does he want me to be? That’s what Johnson needs to learn, and for the quarterback, vice versa. Because those off-script plays are just as important as the ones that run as executed, and if you know how to play them, they can be difference-makers.

“Those can turn into some big plays if you take advantage of [them], and I think that’s something I can do, just keeping plays alive with my legs”, Trubisky said. “It’s one of those ones that I want to improve going from last week into this week is hitting those big plays when you get behind the defense to really make them pay”.

“We’ll get on the same page when it comes to scramble drill and stuff like that”, he added. “We haven’t really talked about it much, but hopefully the guys now see that when stuff breaks down in the pocket, I can make plays outside and just stay alive on the scramble”.

The Steelers have talked about the impact of mobility from the quarterback position for a good half a decade by now as a prime quality that they respect and were bound to look for once it became time for them to be in the market for one.

They have Trubisky and Kenny Pickett, now, both of whom have proven during the preseason that they are capable of eluding pressure, moving the pocket, and delivering a ball under pressure. If they can find that crucial post-script rhythm with the skill players—especially with the way the offensive line is looking—that could be a crucial feature for the offense this year.