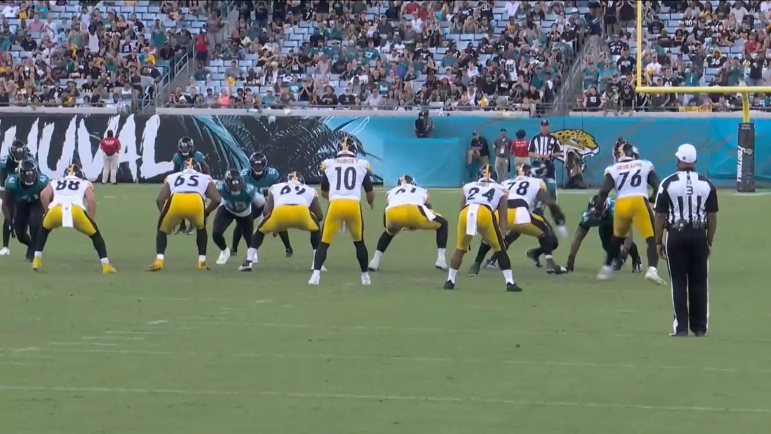 Presumptive starting quarterback Mitch Trubisky played three drives on Saturday for the Pittsburgh Steelers. None of them resulted in points. None of them included him getting many favors from his teammates. And that started with poor execution on early downs.

In fact, the only time that he faced a third down during the game if under six yards was when he scrambled for a 10-yard gain following a three-yard loss on a carry by Benny Snell Jr., which set up a 3rd-and-3 play. His offense ultimately went 1-for-4 on third down, the only conversion on the opening drove on 3rd and 6, on which he hit Chase Claypool for a 29-yard gain on a slot fade.

The second third-down attempt, set up by his scramble, fell apart instantly due to pressure in his face, very nearly getting sacked. It was a minor Herculean effort that prevented the play from dying right there. Still facing pressure—indeed, he was knocked to the ground as he threw—all he could muster was a wing-and-a-prayer heave in the direction of Diontae Johnson, and given the duress he was under, you can excuse the accuracy.

Trubisky’s second drive began with Snell being dropped for a one-yard loss on a sweep that hadn’t a prayer in the world. The back dropped a catchable ball on second down as the release valve, which could have set up a third and manageable, but instead led to 3rd and 11. And with the edges having their ears pinned back, Dan Moore Jr. quickly folded to interior pressure and allowed his quarterback to be sacked.

His final drive seemed to begin promisingly enough, hitting Johnson for a first down on the second play. He looked to have had a second connection on the very next snap, but the receiver was flagged for offensive pass interference, setting the offense back instead of moving the chains again.

There was little hope after that, with three consecutive plays going to Jaylen Warren, the first a four-yard carry, then two short receptions, stalling just short of midfield, five yards shy of a first down.

Clearly, this is no way to run an offense, and the primary shared characteristic is the quality of play from the offensive line, limiting the running game and allowing pressure to disrupt the passing game. Trubisky is not necessarily the quarterback you want to ask to convert a lot of third and longs, but this line is giving him little opportunity to set the offense up for anything else—unless he scrambles on his own.