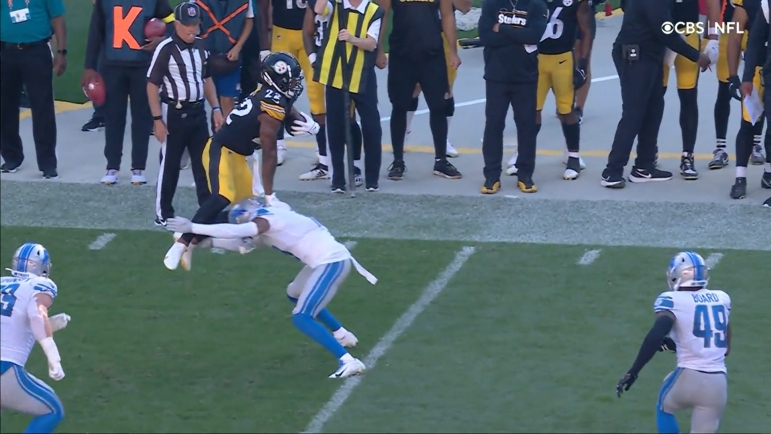 Pittsburgh Steelers running back Najee Harris is coming back from a Lisfranc foot injury that head coach Mike Tomlin didn’t necessarily want him to tell reporters about. He missed about four weeks, yet showed no signs of the injury during his play on Sunday night in the team’s preseason finale against the Detroit Lions.

The second-year back finished the game with seven touches, most of it coming early on, picking up 10 yards on four rushes and 11 yards on three receptions. That’s obviously not a whole lot, but the lack of efficiency doesn’t tell the story of his play. Quarterback Mitch Trubisky’s words do a better job of that.

“He’s a beast”, he said of Harris after the game, via the team’s website. “He’s a beast. It’s our job to create those running lanes for him and lighter run boxes with our matchups on the outside I just got to keep carrying out my fakes and not watch him run the football after I hand it off. He’s obviously a special talent and he makes this offense go”.

He certainly was the driving force of the offense last season, recording a league-high 381 touches and putting together over 1,600 yards from scrimmage while having very little to work with behind a bottom-tier offensive line that limited both the run game and passing game.

A first-round pick out of Alabama in 2021, Harris has certainly lived up to the billing so far, and that’s when considering just the on-field component of what he brings to the team. His combination of physicality, elusiveness, and vision allows him to make something out of nothing more often than not.

Despite his size, he does have impressive agility, and that does show up in his desire and ability to go over defenders whenever possible, something that he even pulled off in Sunday’s game, the only preseason action he saw.

Indeed, he doesn’t even want to come off the field. It seems as though it took an offseason-long cycle of conversations to convince him that it is for the best for both himself and for the team that they allow him to be spelled from time to time.

Of course, it wouldn’t be the first time an offseason plan doesn’t come to fruition when the bullets are flying. Tomlin has a long history of employing workhorse backs, his featured runners seeing disproportionately large percentages of his team’s snaps compared to other starting running backs in the league.

Make no mistake, Najee Harris is going to be the straw that stirs the Steelers’ drink on offense this year, not whoever is under center. They have to do whatever they can to figure out how to allow him to maximize his touches, both on the ground and through the air.