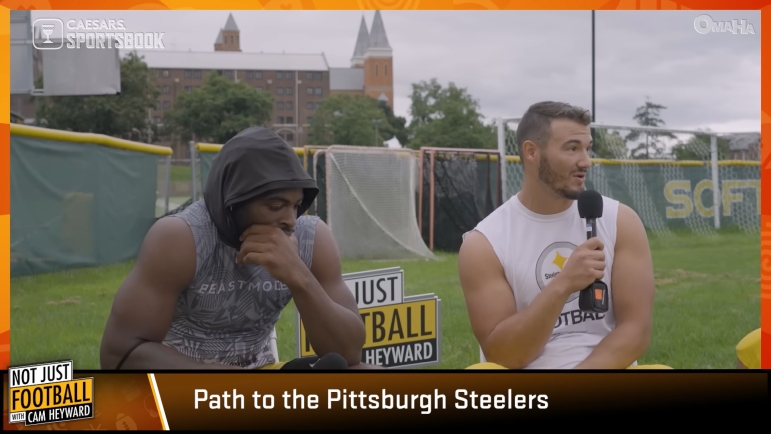 While nothing is official, Mitch Trubisky has long been acknowledged and accepted as the Pittsburgh Steelers’ presumptive starting quarterback entering the 2022 season.

The team is ostensibly waging a quarterback battle in training camp between himself, Mason Rudolph, and first-round pick Kenny Pickett, but it’s been widely reported as being Trubisky’s job to lose, and he has operated as the first-string quarterback since OTAs.

He didn’t know the Steelers would be drafted Pickett a month after he signed with the team as an unrestricted free agent, nor did the team, of course, even if he knew when he signed that they could add to the room. But it’s still the place he wanted to be, he told Cameron Heyward on the Not Just Football podcast yesterday.

“I really didn’t know the Steelers were interested until the morning of, because you can’t tamper. You can’t call”, he said. As soon as it opened up [my agent was] like, ‘They want you, you have an opportunity to go there’”.

“It was one of the spots that I had circled if it became an opportunity that I wanted to go there, and as soon as they called, I had an hour to think it over and talk to my wife, and I was like, ‘We’re going to Pittsburgh’”, he added. “She was excited about it, I was pumped about it. This is where I wanted to be, and it kind of happened really fast the day free agency opened. So it was pretty exciting, and it was a hectic morning, but it was awesome”.

A former second-overall draft pick, Trubisky had mixed success as the primary starter over a four-year period with the Chicago Bears in 2017-2020, helping them reach the postseason twice and making one Pro Bowl.

Yet the team did not think enough of his performance to pick up his fifth-year option, and the Buffalo Bills were able to sign him cheap to be a backup to Josh Allen last year. He believes in his time with Allen in Buffalo and with former offensive coordinator Brian Daboll, he gained a new perspective and was made better for it.

Despite only throwing a few passes all of last year, Trubisky managed to raise his profile anyway to the point where there was some market for his services among quarterback-needy teams this offseason. The Steelers were obviously the most eager to get him, making the rare day-one signing agreement.

At the time, they still had Rudolph, as well a Dwayne Haskins, another former first-round draft pick, though he was quickly installed as the favorite. Haskins passed away suddenly after being struck by a vehicle on highway, but after the team drafted Pickett, the talk of a quarterback competition instantly heated up.

All three quarterbacks have had their ups and downs throughout training camp, but they elevated the conversation in the first preseason game. Tomorrow night, they could raise it to another level, with Trubisky starting, but this time with Pickett following directly after him.