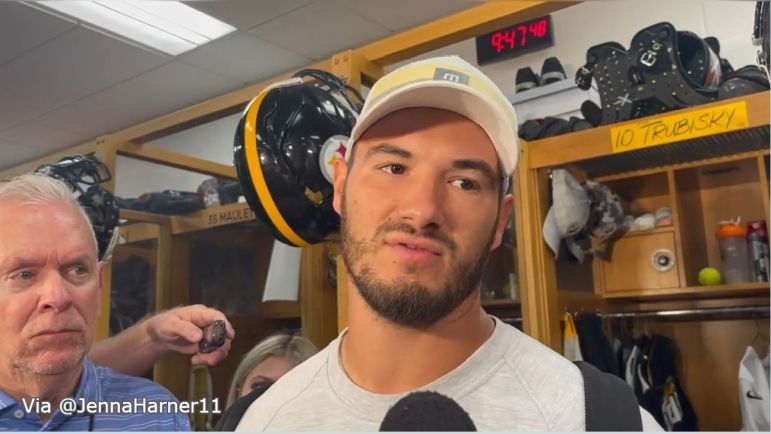 Despite some of the outside noise that’s starting to reach a palpable level regarding the quarterback competition within the Pittsburgh Steelers locker room, veteran Mitch Trubisky appears unfazed by any calls for rookie quarterback Kenny Pickett to win the starting job for the Week 1 opener at the Cincinnati Bengals.

Though he undoubtedly hears it, Trubisky remains committed to his craft and believes he’s in a good place right now within the Steelers scheme offensively under second-year offensive coordinator Matt Canada, telling reporters Wednesday inside the Steelers locker room at the UPMC Rooney Sports Complex on the South Side that he feels really comfortable with where he’s at overall, on and off the field, despite a limited sample size.

Through two preseasons games, Trubisky has taken just 28 total snaps compared to the 42 taken by Pickett and the 55 taken by Mason Rudolph. Realistically, that shows the Steelers are preparing Trubisky as the starter as he’s not seeing the field much and is instead getting many of the first-team reps in practice in preparation for the season opener on Sept. 11.

While the snaps haven’t quite been there in games, Trubisky feels he’s on the right track in the black and gold, according to video from inside the locker room Wednesday via the Pittsburgh Tribune-Review’s Chris Adamski on Twitter.

“It’s been a limited sample, but I think I’ve done a lot of great things in practice, a lot of good throws in the game,” Trubisky said to reporters Wednesday, according to video via Adamski. “I’m just focused on what we can improve as a unit right now, and that’s staying on the field on third down and going down and finishing with some points, especially last game. You’d like to stay on the field a little longer, finish in the end zone, so we’re just looking to see what we can improve an keep doing that. But, I’ve done a lot of great things so far and I feel really comfortable with where I’m at, how I’m throwing the football, learning the playbook and going through my reads so far.”

Mitch Trubisky wants to and is eager play Sunday pic.twitter.com/1iJ2dRf68W

Trubisky should feel pretty comfortable overall with where he’s at and how he’s progressing. He hasn’t done anything to lose his grip on the starting job, and has performed admirably in his limited number of reps.

The sample size on Trubisky has been pretty limited overall, but he has done some really good things throughout training camp in Latrobe and in two preseason games. He had to scramble for his life against the Jaguars, which hindered his ability to make some plays overall, but even in the preseason opener against the Seattle Seahawks he looked really good, leading a scoring drive with a touchdown throw to Gunner Olszewski.

He’s going to be the guy to start the season, even with Pickett coming on strong. He’s comfortable and confident, which are two things that will help him get off to a good start in the black and gold once the ball is kicked off to open the regular season.