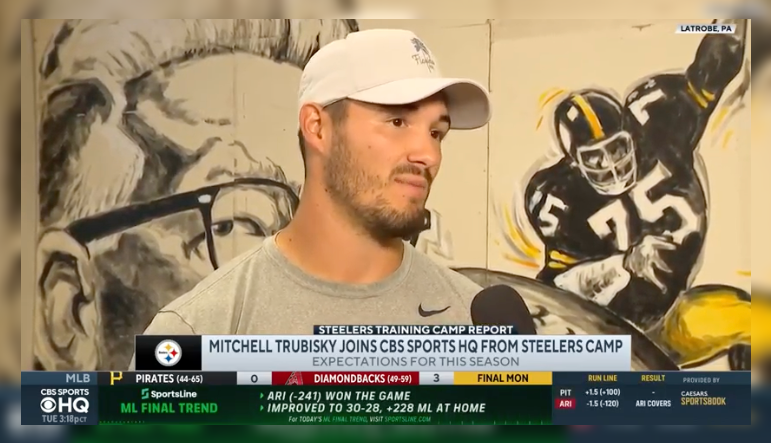 Since signing with the Pittsburgh Steelers on the first day of free agency in March, veteran quarterback Mitch Trubisky has been treated like the starting quarterback by head coach Mike Tomlin, offensive coordinator Matt Canada, and the rest of the Steelers’ roster overall, give or take a few players in the quarterback room alongside him in the midst of a three-way position battle.

Despite being new to the team, Trubisky has embraced his leadership role as the quarterback of the Steelers, especially in training camp at Saint Vincent College, where he’s beginning to find his voice under center and establishing his overall leadership style.

Being a team leader and looked to as a leader under center isn’t anything new for Trubisky. During his time with the Chicago Bears, Trubisky was a team captain that represented the offense. He held down the same role in his one season as a start at North Carolina, so his leadership abilities have been tested and fully developed.

Doing it in a new place like Pittsburgh, especially on a young offense like the one the Steelers have ahead of the 2022 season, will be a big test for the sixth-year quarterback. Speaking with CBS Sports HQ’s Jonathan Jones and former Steelers cornerback Bryant McFadden Tuesday following practice, Trubisky stated that he’s embracing his leadership role, which his helping him build confidence and chemistry with the young offense overall.

“I think it comes natural to me. It also is just the position,” Trubisky said to Jones and McFadden Tuesday, according to video via CBS Sports HQ’s YouTube page. “You are quarterback on the team, everybody’s looking to you. You gotta be a leader, and I think it’s a mix of just who I am and my past experiences being on other teams and me just knowing what it takes to win. And I just come in here, be myself and lead.

“These guys follow Coach Tomlin’s lead, and the other vets who have been here as well, like Cam Heyward and T.J. Watt on defense. So it’s been awesome competing against them every day, but we’re trying to lead our unit on offense,” Trubisky added, according to video via CBS Sports HQ’s YouTube page. “And I think I’ve done a great job of that so far just bringing the guys together and then showing them who you are. It all starts with building trust and chemistry off the field. And then you take that on the field and just let plays happen.”

On Tuesday at Chuck Noll Field on the campus of Saint Vincent College in Latrobe, Trubisky really put that leadership, confidence and chemistry on display, easily having his best day of camp, which has kept him in the driver’s seat for the starting job not only for Saturday’s preseason matchup against the Seattle Seahawks at 7 p.m. in Acrisure Stadium, but also for the Sept. 11 season-opener at 1 p.m. against the Cincinnati Bengals on the road.

Based on his showing Tuesday in practice, it seems like Trubisky is starting to truly settle into his role as not only a leader, but the starting quarterback of the Steelers. He seems much more comfortable in the system and is starting to let the ball fly down the field, adding a real element to the offense through the air and on the ground.