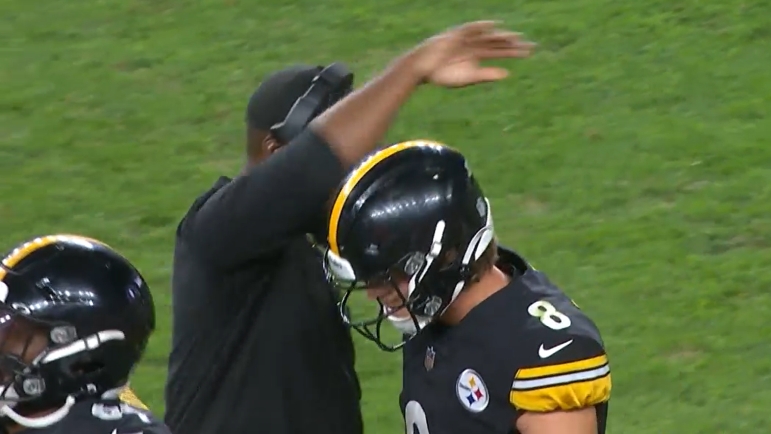 The Pittsburgh Steelers debuted not only in Acrisure Stadium tonight, but also with a new quarterback, or rather, a couple. Veteran Mitch Trubisky opened the game as the starter, but rookie first-round draft pick Kenny Pickett did go the distance for the entirety of the second half.

The Pittsburgh product tossed two touchdowns, and that included the game winner with just seconds remaining, finding Tyler Vaughns, who escaped a defender to finish the pass into the end zone, avoiding the necessity of attempting a field goal.

Head coach Mike Tomlin was focused only on the positives in his post-game press conference regarding his first-rounder. “He moved his group. He played situational football. He played with a competitive spirit”, he said. “A lot of good things to build on from a first performance standpoint”. But he added all three quarterbacks who played performed similarly.

“I thought I could say the same thing about all three, to be honest with you”, he said. “They moved their units, they did the informal things associated with the position from a leadership and communication standpoint. They were engaged. It was a good first time out for all three. Obviously, we’ll comb through it tomorrow and evaluate it in that way”.

All in all, Pickett completed 13 of 15 pass attempts in his debut, albeit for only 95 yards, but he did finish with two touchdowns, including a game winner, with a quarterback rating of 132.6. He also recorded three rushes for 16 yards, showing good scrambling ability, including a third-down conversion after escaping pressure.

Prior to the rookie coming in, Trubisky led a touchdown drive on the Steelers’ opening possession, playing two drives in all. He completed four of seven passes for 63 yards and a score, finding a wide-open Gunner Olszewski, how had three catches for 47 yards along with the score.

But the story of the night is naturally going to be about the shiny new first-round pick, and the fact that he just led a game-winning drive and scored on his first possession as well. Nevermind the fact that they turned the ball over on downs just before the game-winning drive, the defense getting the ball back courtesy of a strip sack from rookie inside linebacker Mark Robinson.

Regardless, it was an encouraging start for the man the Steelers identified as the potential future of their franchise. And he certainly got the crowd excited. He may have to wait before he gets the chance to start a game in the regular season, but tonight didn’t feel like a preseason game with the way he was received.