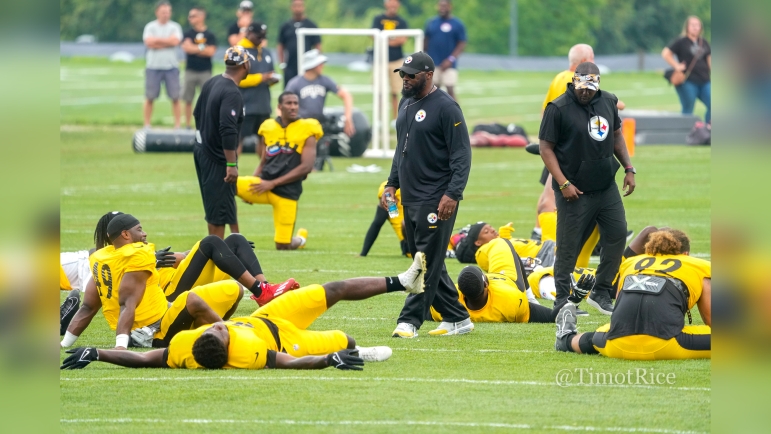 Still, despite some of the curveballs thrown at them last minute due to inclement weather that rolled through western and central Pennsylvania this weekend, the Steelers handled the changes well and kept up an intensity and urgency level that pleased head coach Mike Tomlin.

Following the 41-mile trek from Saint Vincent College in Latrobe to the UPMC Rooney Sports Complex Saturday morning for practice due to weather-related issues, the Steelers went through a relatively crisp practice, handling some early adversity in training camp.

Speaking with reporters following practice at their home venue Saturday, Tomlin praised his team for the intensity and urgency shown throughout the practice in getting good work done, while also expressing his disappointment for the fans that were planning on attending Friday and Saturday’s practices but were unable to due to weather, according to video via Steelers.com.

“I’ll first start by saying we were just really disappointed for fans this weekend. We were looking forward to entertaining them and gaining a lot of energy from those guys at Friday Night Lights and today, but unfortunately the weather dictated otherwise,” Tomlin said to reporters Saturday, according to video via Steelers.com. “I really was pleased by the guys and their intensity and urgency in spite of that. We came back into the city to get our work done today and as a start, we had a really good practice in spite of some of the hurdles that we had to deal with from a weather standpoint.

“We don’t run away from those issues. We run to those issues. We play in all weather conditions, just not lightning. It was good to see them remain singularly focused and have good, competitive days in spite of the adjustments.”

That right there is a typical Tomlin response. The Steelers were dealt significant adversity from a practice schedule standpoint the last two days. They dealt with it by running headlong into it, adjusting on the fly to a practice back at the UPMC Rooney Sports Complex on the South Side of Pittsburgh, and had a strong day overall, at least in Tomlin’s eyes.

It’s certainly positive news to hear from Tomlin’s perspective too, considering the Steelers need the valuable training camp time to continue to grow and develop together, not only ahead of the August 13 preseason matchup against the Seattle Seahawks at Acrisure Stadium, but ahead of the Sept. 11 season opener on the road against the Cincinnati Bengals.