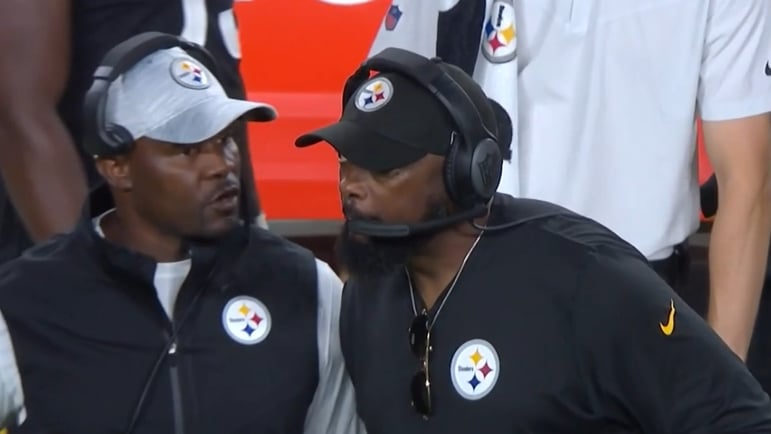 Pittsburgh Steelers senior defensive assistant Brian Flores might well be the most respected man in the NFL’s coaching ranks right now who doesn’t currently occupy a head coaching job. He certainly has the respect of the man who brought him on board here, the team’s own head coach, Mike Tomlin.

Recently, Pittsburgh native and former Pro Bowl wide receiver Brandon Marshall took his I Am Athlete crew to Latrobe and nabbed a short interview with Tomlin, who was at one point asked to name his top five head coaches in the league right now—but he had to name two who are not currently head coaches, including the man on his own staff.

“Flores, I know he doesn’t have a [head coaching] job right now, but I feel really good about having the ability to get his services, if only for a short time”, he said, reflecting an expectation that he will be hired to another head coaching role in the near future. “It’s a rental. But I’m gonna enjoy him while I got him”.

Having spent the past three seasons as the head coach of the Miami Dolphins and largely exceeding expectations anybody had for the team, his firing early this offseason was met with universal surprise—sending further shocks when he was passed over for all head coaching vacancies despite interviewing for just about all of them.

On February 1, as you know, Flores filed a lawsuit against the NFL and three of its teams, the lawsuit since expanding to also include Ray Horton and Hue Jackson as plaintiffs, with new charges being levied, various accusations of questionable hiring practices.

Many believe it’s the reason he did not land any of the vacant posts, especially that with the Houston Texans, who interviewed him, and who employ long-time New England associate Nick Caserio as their general manager.

Flores will play out this season with the Steelers, an opportunity for which he has expressed nothing but gratefulness, both to be in the organization and to work with Tomlin, but he’ll surely be back out on the circuit in the next round of hirings.

Most of the others on Tomlin’s list probably aren’t going anywhere anytime soon, though, naming, for example, the coaches of the teams who were in the NFC Championship last, the Rams’ Sean McVay and the 49ers’ Kyle Shanahan.

“I love my young go-getters out west”, he said. “McVay and Shanahan, I’ve been boys with those guys a long time. They’re challenging schematically. They take it personal. They’re trying to put their foot on your throat each and every week, and I think their player sense that and buy into that”.

Tomlin also praised Raheem Morris, another former head coach, currently the defensive coordinator under McVay for the Rams, crediting him for “getting them over the top”, but he saved his final adulation for the man who put the Kansas City Chiefs over the top for the first time in 50 years.

“I love Andy Reid. I’ve always loved Andy Reid because of his organizational skills”, he said. “I love Andy Reid. I just always have. I’ve had an opportunity to work with people that have worked for him, and I just feel and see the comforts of the structure and the environment that he provides”.

No doubt many other head coaches around the league would put him in their top five if asked. He’s not only perennially been one of the best in the business and perhaps the greatest communicator in the entirety of the game, but he’s also extensively made himself available as a resource to younger coaches and ingratiated himself to the preceding generation. The respect that he commands is certainly earned.