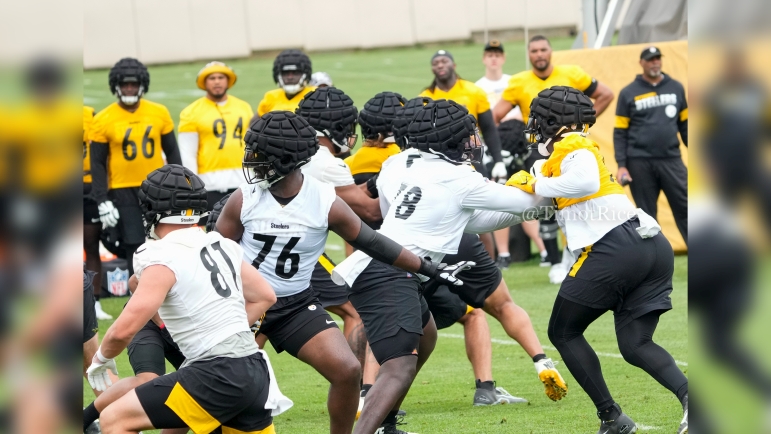 The Pittsburgh Steelers watched their offensive line struggle last year and knew that they had to spend time this offseason making it better. To that end, they utilized free agency to provide an immediate upgrade, bolstering both the starting lineup and the depth chart.

James Daniels came in as the new right guard, and Mason Cole replaces 2021 rookie Kendrick Green at center, the latter now competing for the left guard job with Kevin Dotson. Chukwuma Okorafor remains at right tackle, where he has this year had the opportunity to practice all offseason, and second-year Dan Moore Jr. is set out to show growth after being thrown into the fire last season.

So far, the results have been underwhelming, but not insignificant, at the same time. Yesterday marked perhaps the line’s best day so far, the second day in pads, and especially in the run game. Pass protection is sluggish, but that is harder to put together in terms of communication–and you have to play against T.J. Watt, Cameron Heyward, and Alex Highsmith when you’re here.

Asked if he was seeing anything to be encouraged by or optimistic about from the progress of the offensive line, head coach Mike Tomlin said after yesterday’s practice, “I don’t know that I’m looking to be optimistic. I’m just gonna keep snapping the ball and allow the growth to happen, and it has. But it’s a reasonable expectation for it to continue”.

The Steelers had one of the worst offensive lines in the NFL last season, for various reasons, talent level certainly being among them. Okorafor was thrown into right tackle at the last moment after preparing to play left tackle; Moore was preparing to be a backup; Trai Turner was signed as a stopgap after David DeCastro was let go due to injury; Dotson missed half the season due to injury; and Green was clearly not prepared to play at center.

One can easily come up with a list of reasons to be optimistic about the line being better this year than last year, but that is a low bar to clear. Also of note is, of course, a new offensive line coach in Pat Meyer, a storyline that has been largely ignored throughout the offseason.

The good news is that the Steelers’ starting five linemen have thus far been able to remain on the field consistently, which was far from the case at this time last year. 2021 intended right tackle Zach Banner hardly played at all, while Dotson began training camp injured, as just some examples.

The best way for a unit to get better is to take reps together, and they are getting the opportunity to do that. We should see a steady growth trajectory throughout the course of training camp and the preseason. Let’s just up that the finished product is sufficient by the time the regular season starts.