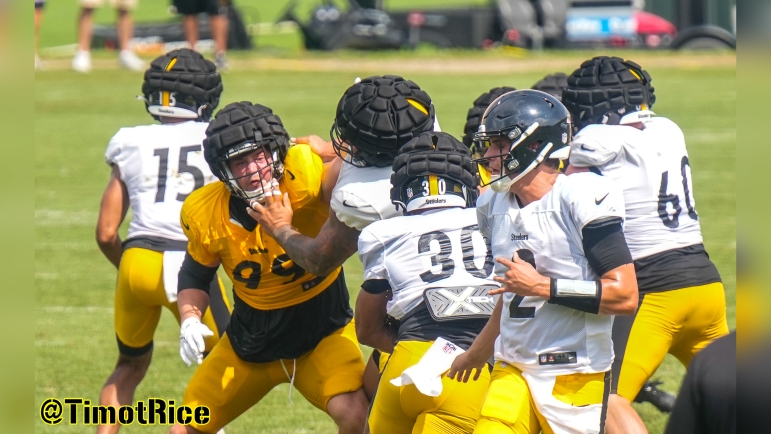 Taking a gander at the Pittsburgh Steelers’ depth chart, they currently have Najee Harris at the top, Benny Snell Jr. in one slot behind him, and then…intrigue. The coaching staff doesn’t know which third running back is going to make the team, but at least some of the prospects in camp have put up a fight.

Most notable is Jaylen Warren, a rookie college free agent, who has caught the eyes of many, and has become the subject of frequent questions posed to head coach Mike Tomlin during his post-practice media sessions. He’s got Max Starks’ attention, as well. And he sees it in his work in pass protection, sort of a symbol of who he is as a player overall.

“You talk about being a good running back as far as running the ball when it’s in your hands, but what he does in the passing game to come across the formation on scans and pick up those blitzing linebackers, and he’s willing to meet them in the hole and be a willing battering ram, is one of those things that’s really refreshing”, the former Steelers lineman said on Training Camp Live on Thursday, via the team’s website.

“And he doesn’t lose his feet”, he added. “When he does make contact, he stays on his feet and he stays attached to those guys, and it’s not like a one-hitter quitter, where it’s just a haymaker and you don’t know what’s gonna happen. He is staying steady and has a good, solid base about him”.

Warren first garnered attention during the backs-on-backers drill, a very popular exercise due to its physicality and emphasis on collision. The rookie more than stood his ground, which is always a good way to make a positive first impression in pads to your coaches.

The rookie takes the same approach to running the football, and certainly doesn’t shy away from contact, but isn’t all brute force. He’s also shown some football intelligence, including in diagnosing blitzes and getting to his spot.

While the Steelers have a Pro Bowl talent in Harris at the top of the depth chart, the rest of the group is much less proven. Even Snell, going into his fourth season, knows that he has to earn back some trust that fans might have lost in him last year.

Anthony McFarland has been rostered for the past two seasons, but he understands that he will have to earn his job this camp, also competing with two other undrafted rookies in Mataeo Durant and Master Teague III.

Durant is the closest to his skillset, a leaner back with more quickness and receiving skill, while Teague is more similar to that of Warren and Snell. But they all should get plenty of work over the three preseason games, starting against Seattle, to try to separate from the herd. Going in, Warren might have a slight lead, or is at least right up there in the mix.