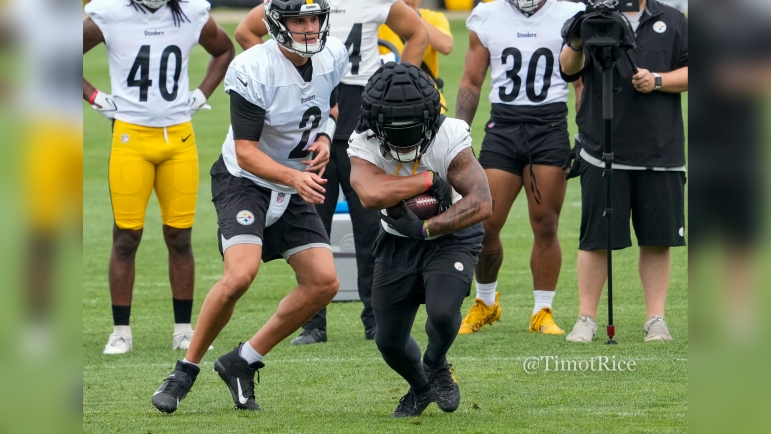 For much of the offseason, the talk surrounding second-year star running back Najee Harris has centered on the Pittsburgh Steelers wanting to lessen his workload in 2022. That comes on the heels of a breakout rookie season in 2021 in which he tallied 381 touches for 1,667 total yards and 10 touchdowns, breaking the Steelers’ rookie rushing record and rookie all-purpose marks.

He also led the league in total touches for a running back, and proved to be a real workhorse for the Steelers. However, that type of workload just isn’t sustainable in the NFL, even for Harris. Knowing that, the Steelers are out to try and find ways to lessen his workload, lowering his snap count and his touches overall in any way that they can without disrupting the offense.

It sounds good in theory, but the Steelers might not have the backup behind Harris to allow them to do that on a consistent basis throughout the 2022 season, assuming Harris remains healthy. Benny Snell Jr., Anthony McFarland, Jaylen Warren, Mataeo Durant and Master Teague III are all fine names on paper, but there’d be a significant drop-off from Harris to any of those names on a snap-to-snap basis, let alone for extended stretches.

However, former Steelers offensive lineman and current analyst Max Starks, appearing on the Steelers’ exclusive look inside training camp at Saint Vincent College in Latrobe, stated that he believes the running back to help take the load off of Harris is already on the roster, with all of them bringing some variety to the table.

“I think the guy is on this roster right now. I’ll put it that way,” Starks said, according to video via the Steelers’ official YouTube page. “And I think you’ve got a lot of different varieties. As we look at this running back group, a lot of different body types. You’ve got Master Teague there, a bigger, thicker running back. You have Mataeo Durant, taller, a little bit slimmer. Anthony McFarland, a little bit shorter, but absolutely crazy explosion and agility. And then Jaylen Warren is another one.”

Those names all bring different things to the table, with Snell and Teague being potential power backs between the tackles with their thick frames and powerful running styles. Warren brings the complete package to the table with speed, toughness and the ability to break tackles between the tackles, while McFarland and Durant are more of the speed options that can catch the football out of the backfield and turn a short pass into a long gain in a hurry.

Still, none of those guys, outside of maybe Snell, provides any comfort behind Harris, at least from an outsider’s perspective. Snell is the most experienced and has shown in the past that he can handle a heavy workload, but he’s had two disappointing seasons in a row and is now entering his final season under contract with the Steelers. He’s a valuable special teams player, but he feels like the type of guy that needs significant work to get going, and that’s just not going to happen as the No. 2 behind Harris.

Starks believes that the guy to take some of the load off of Harris is on the roster though, which certainly isn’t a stretch.

“I think all of these running backs can run a similar package; they just add their own little inflection to it, a little extra here and there to make it a little bit different, even in the same thing,” Starks added, according to video via the Steelers’ official YouTube page. “So I think that’s an added benefit that we didn’t have a year ago.”

Head coach Mike Tomlin is certainly pleased with what he’s seen behind Harris so far in training camp as guys like Snell, Warren and McFarland have taken advantage of Harris sitting out with a foot injury in the last week or so, seizing upon the added reps to turn some heads and draw some eyes in the battle to stick on the 53-man roster.

It will be interesting to see how the battle plays out in the preseason in real NFL action, but Starks’ comments certainly have some truth to them, especially considering the Steelers have worked out a handful of running backs in the last few weeks or so, but haven’t really upgraded over a Snell or McFarland at this point.

That could all change come cutdown day, but for now, that guy behind Harris to lighten the workload has to be on the roster in Latrobe.