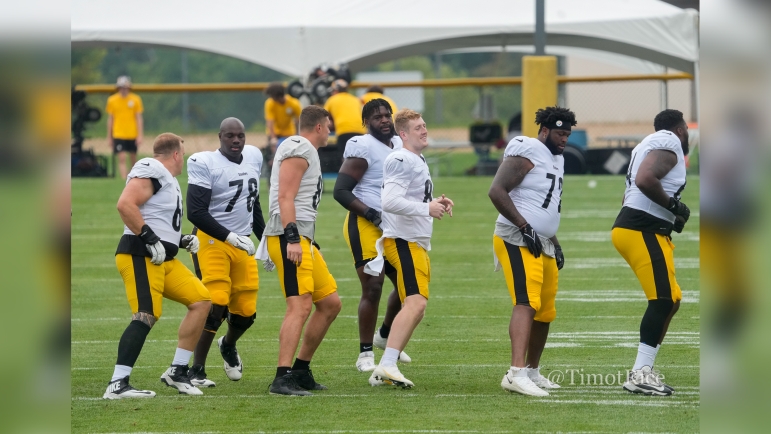 If the Pittsburgh Steelers’ biggest question mark this year is the quarterback position, and distantly so, then the question of the offensive line has to stand firmly in second place both in terms of importance and uncertainty.

The team had quite arguably the worst offensive line in the entire NFL during the 2021 season, and the reality is that they return at three starters from that group, those being their tackles, and whoever ends up starting at left guard. The two free-agent veterans, James Daniels and Mason Cole, are the only new blood.

But offensive coordinator Matt Canada likes what they’ve brought to the table thus far, as he told Pat Kirwan, Jim Miller, and Paul Alexander on Friday on the Movin’ the Chains program on SiriusXM Radio. “Those two guys have played some football other places and come in and given us a little bit of leadership and experience with what they’ve done”, he said of his starting center and right guard, before proceeding to break down the rest of the group:

We had two rookies starting last year in Dan [Moore Jr.] and KG [Kendrick Green], and they’ve both grown and come up. Kevin Dotson at the left guard, he and KG are battling, and Dot was hurt quite a bit of last year, coming back, and then we feel really good about Chuks [Okorafor], where he is, and the experience he’s had here in our organization and at right tackle, being solid over there.

While still just 24, Daniels is the most experienced of the Steelers’ linemen now, coming over from the Chicago Bears. Cole is next in line, and has started in multiple places before signing with the team as an unrestricted free agent. Okorafor also has two years of starting experience at right tackle.

Moore did start 17 games at left tackle last season, and coaches are seeing growth and development from him in training camp thus far, but the question is whether or not it will be enough. And the left guard position remains an uncertainty, though they like the competition there.

“We feel really good about the players”, Canada said. “The gelling of the offensive line comes in time. We always want it to be yesterday. We do feel good where we’re headed. Every day we’re getting a little better. They’re getting to be more and more on the same page”.

The offensive line coming together as a unit will perhaps tell the story of the Pittsburgh Steelers’ 2022 season more than anything else. The defense will play up to a certain level, and the quarterbacks will be the quarterbacks—at best, a game manager with the occasional splash play, and hopefully a manageable number of turnovers.

But it will be the line that decides how much of a run game they have to complement the passing game, and how much time the quarterbacks have to get the ball out to his receivers, especially since these aren’t the fastest processors in the NFL. If they can get competence out of this group with the occasional strong game, then perhaps they have a chance to make some noise.