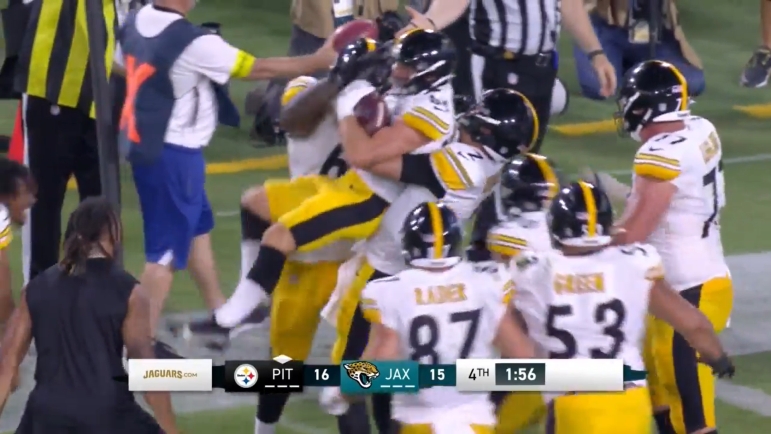 While the Pittsburgh Steelers have not necessarily been the most polished of teams thus far in the preseason, they have been among the most efficient when time is most precious. They have managed to score four times within the final five minutes of each half through two games, including a pair of touchdowns tonight.

The first was led by rookie quarterback Kenny Pickett, the team’s only points until the second half of the fourth quarter, finding Benny Snell Jr. in the flat to end a five-play, 63-yard drive. The second was a six-play, 52-yard drive sparked by a defensive interception with 3:03 to play, taking 1:07 of game time to take the lead with under two minutes to play, Mason Rudolph finding Tyler Snead in the end zone. But it’s all a product of preparation.

“A lot of fun. We work a lot of two-minute drives in practice”, Rudolph told reporters in the locker room after the game, via the team’s website. “You feel prepared and you know kind of what calls are gonna come down from Matt [Canada]. He knows what calls I like. I thought we did a good job with communication. He made some good calls and gave us a chance to put the ball in the end zone there at the end”.

As head coach Mike Tomlin said during his post-game press conference, although the Jacksonville Jaguars won significantly more downs than they did, the Steelers won more of the weighty downs, and that allowed them to come out on top in spite of the very uneven showing.

The head coach, again, attributed it to preparation. “We functioned in two-minute offense, and it was great because we put an extra emphasis on two-minute offense in preparation for this game”, he told reporters. “So, it’s good to see time spent pay off. Seven-shot football won the game for us, 4th and 2 there at the end, and we’re appreciative of that”.

Actually, it was officially 4th and 1 on the game-winning pass to Snead, preceded by an inside slant to Tyler Vaughns for five yards. Vaughns had made the two key plays on the drive up to that point, gains of 25 and 21 yards on consecutive plays, after scoring the game-winning touchdown last week.

For Rudolph, who played the entirety of the second half, it was a much-needed finish as he continues to push for whatever role he might have in the offense this year. He now has two touchdown passes during the preseason, and still the nicest, a 26-yard strike to George Pickens last week in the back of the end zone. An improvement from his performance at the end of the first half last week.