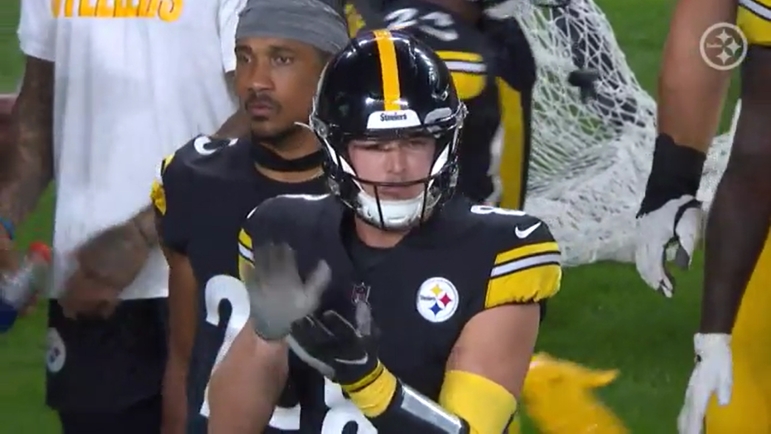 Over the last few weeks in training camp at Saint Vincent College in Latrobe, as well as in the preseason opener against the Seattle Seahawks at Acrisure Stadium, Pittsburgh Steelers rookie quarterback Kenny Pickett has continued to take significant steps forward in his overall development.

From where he was in OTAs and minicamp, even early in training camp, to where he is now has been quite the display of growth and overall development with his confidence and comfort within the offensive scheme under second-year offensive coordinator Matt Canada, as well as the teammates around him.

New starting center Mason Cole, signed to a three-year deal in free agency more than a month before Pickett was drafted 20th overall in the 2022 NFL Draft, stated during an appearance on 93.7 The Fan’s PM Show with Andrew Fillipponi and Chris Mueller Tuesday after practice that it’s been quite enjoyable to watch the future franchise quarterback for the black and gold continue to grow and get more and more comfortable overall.

“Yeah, man, Kenny’s awesome. Actually here in Latrobe, our lockers are right next to each other, so I mess with Kenny a lot and…we have a good time,” Cole said to Fillipponi and Mueller, according to audio via 93.7 The Fan. “Over the last three OTAs and through now, he’s become so much more confident. He’s okay with changing the mike point. He’s okay with throwing hot on empty protections. He’s okay with the jet sweeps we do and reading all these things. And just over time he’s got more and more comfortable. It’s been cool to watch him grow and become more himself as the time’s gone on.”

While it’s difficult to truly understand or grasp just how much growth Pickett has shown behind the scenes, on the field in practice and in the game against the Seahawks, Pickett has really progressed. Throughout his work in training camp, Pickett has settled in nicely and is taking advantage of more and more reps overall.

In the game against the Seahawks, Pickett looked very poised overall right from the start of the second half, even with the cheers raining down on him and all eyes glued to the hometown hero in the preseason action.

He’s starting to get more comfortable overall, which is allowing his intriguing traits to really start to show in game-like settings. If it continues, he’ll make it a rather difficult decision for Mike Tomlin prior to the Sept. 11 season-opener against the Cincinnati Bengals on the road regarding who the starter is under center.