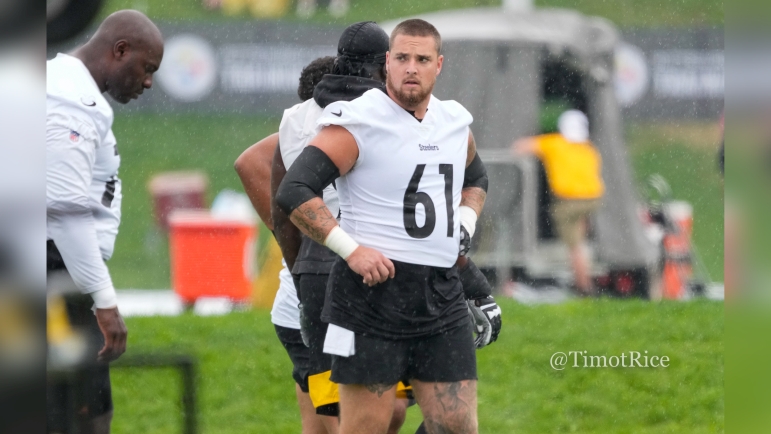 The Pittsburgh Steelers’ offensive line had a brutal performance Saturday night in the team’s 16-15 preseason win over the Jacksonville Jaguars. There was no push in the run game, and quarterbacks were under pressure all night. Starting center Mason Cole said he believes the issue lies in technique.

“Our effort is there. our abilities are there. We know we can use right technique. We’ve just gotta trust ourselves in using the technique and really play to win the rep, not play to not lose,” Cole said via a tweet from ESPN’s Brooke Pryor.

Playing it safe or playing not to lose is basically playing to lose. Guys can’t be afraid of losing a rep, because that leads to them playing it safe and more often than not, getting beat. Pittsburgh’s offensive line is learning what is a new technique to a lot of them, but they have to trust whatever they’re doing and execute it. It’s clear that what they’ve been doing the last two games isn’t working.

It’s only been two preseason games, so I don’t want to be too reactionary. At some point though, if the line keeps playing this poor, the talent level has to be questioned. It’s not as if the line all have a pedigree of being solid performers and it’s just a few off games execution-wise. It’s a group of guys who are all looking to prove themselves and show they belong as starters in the NFL. So far, they haven’t shown much of anything.

Without better offensive line play, Pittsburgh is going nowhere this season. If the running backs don’t have room to run and the quarterback doesn’t have time to throw, then the offense isn’t going to be good. Mitch Trubisky looked pretty suspect on Saturday, and a good portion of that blame can be applied to the offensive line. He had some other issues, but the line was the cause of too many of them. That’s going to be a recurring theme this year if the line doesn’t improve.

Cole also said the line needs to be able to bounce back.

“The peaks and valleys of this league are so high and low, you have no other choice than to bounce back,” he said via Josh Rowntree of 93.7 The Fan.

It’s really a make-or-break year for the offensive line as a whole. If there are wholesale struggles, there are going to be changes made next season. It’s time for the linemen to prove they belong as starters in the NFL. If they don’t, they’ll be backups or elsewhere next season. Hopefully, they begin to trust the technique and play aggressive and start winning reps, because playing not to lose has led to a whole lot of lost reps. At this level, that simply can’t happen. The line needs to be better, and they need to show that they can be on Sunday against the Detroit Lions.