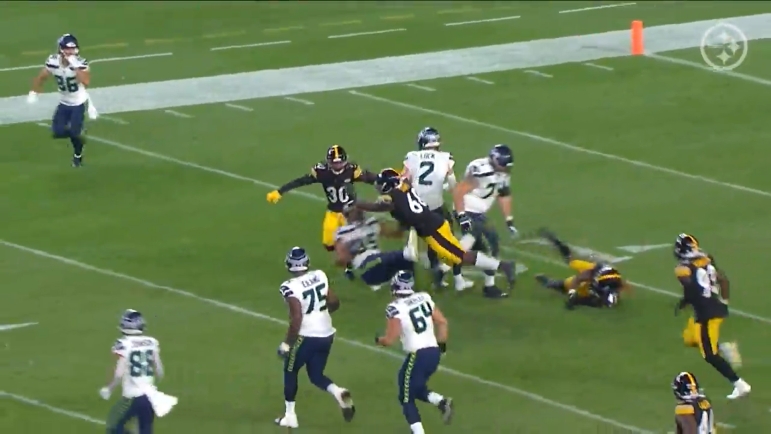 Khalil Davis is a former sixth-round draft pick of the Tampa Bay Buccaneers, in his first full season now with the Pittsburgh Steelers. Along with his twin brother Carlos, the two are competing—including against one another—for precious real estate along the team’s defensive line depth chart, whether on the 53-man roster or the practice squad.

The dual Nebraska alumni, both in their third seasons in the NFL, are running on third-team units, checking into the game in the second half last night. But it was Khalil who had the opportunity to cap off a victory following a game-winning drive for the offense with an exclamation point.

Trailing by seven with three seconds left and getting the ball back at their own 25, the Seattle Seahawks had to resort to trickery to have any hope of scoring. One false screen and three backward passes later (one of which was actually a forward pass but not flagged), Davis came in unseen and put a wallop Tyler Mabry, the play netting a loss of 10 yards and a big reaction from head coach Mike Tomlin.

Asked about ‘the finisher’ by Brian Batko of the Pittsburgh Post-Gazette after the game, Davis said, half-serious, “I was thinking they were going to knee the ball and end the game. I said, ‘Man, you guys want to do a trick play? Okay, I’ll call game then”.

Early candidate for my favorite Steelers quote of the year: “Man, you guys wanna run a trick play? OK, I’ll call game then.”

And he certainly did that, not that there was much hope of altering the outcome at that point. He added, more seriously, “I was just playing until the game was over. I didn’t want a big shot play, but they didn’t see me in the middle, so I just took my shot”.

It wasn’t in any way a questionable tackle, to be certain, just a rather emphatic one that is largely a byproduct of the fact that it came from an unanticipated angle for the runner. But it was a good way to end the game, for sure, and not a bad way for Davis to remind the coaches that he’s gunning for a roster spot.

Right now, the Steelers have 10 defensive linemen who have either been on NFL rosters or are pedigreed rookies. Cameron Heyward, Tyson Alualu, and Larry Ogunjobi, along with third-round pick DeMarvin Leal, are your perceived locks. You also have Chris Wormley, Montravius Adams, and Isaiahh Loudermilk all returning from last season.

Most likely, for either Davis brother to make it onto the 53-man roster, one of those latter three will have to be seated, if not two, as it remains exceedingly rare that the Steelers actually carry seven defensive linemen.

But there is room on an expanded 16-man practice squad. Neither has more than two accrued seasons, so they are not even restricted by the limitation of no more than six veterans of any level of experience. And it’s not unreasonable that the team carries nine total defensive linemen between the 53-man roster and practice squad.