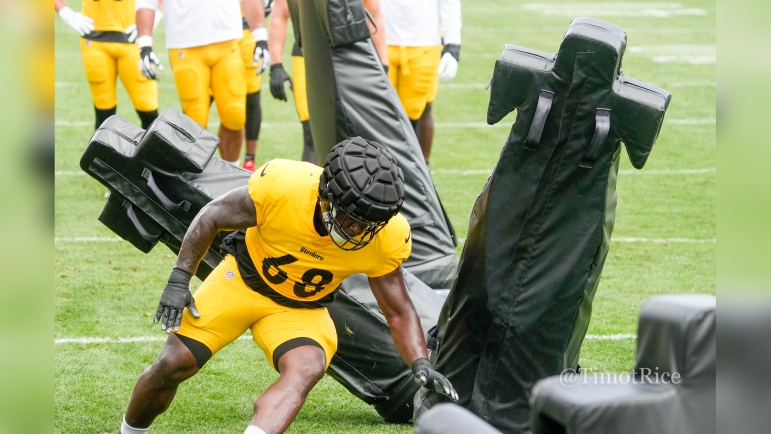 The Pittsburgh Steelers’ defensive line room is a crowded one, so much so that we have been talking about the very distinct possibility that they could carry seven defensive linemen since the early portions of the offseason—or at the very least, since after the draft.

The crowded room is not good news for the Davis brothers, a pair of former late-round draft picks in 2020, Carlos of the Steelers in the seventh and Khalil taken in the sixth by the Tampa Bay Buccaneers. Khalil joined the Steelers’ practice squad midseason a year ago after he was cut, and is battling, among others, his own brother for a job.

“It’s a very tricky experience, but I know who he is”, Khalil told Ray Fittipaldo of the Pittsburgh Post-Gazette of the curiosity of potentially competing directly with his own twin for one spot on the roster, or the practice squad. “We’re both just trying to get better. If we can both get better and we help each other get better, it will end up good for both of us”.

Following a promising, somewhat cameo-like rookie season in 2020 during which he played 54 defensive snaps, there was some enthusiasm behind Carlos Davis entering his second season, with some believing that he could develop into a significant contributor.

An injury in the season opener, however, derailed all plans. While it took some time for the team to actually put him on the Reserve/Injured List, he missed most of the season, and when he finally returned late in the year, they were reluctant to play him at that point.

Davis’ injury was one of several reasons that the Steelers needed defensive line depth when they did sign his brother to the practice squad in the middle of the year, and he tells Fittipaldo that Carlos did put in a good word for him with the team. Now he’s looking to make his own impression.

“It’s awesome”, he said about being back on the same time with his brother, as they were in Nebraska. “It’s a different experience because it’s his team. I came to add to the team. He’s showing me the ropes and helping me through the process of how they play here and what it’s like be a defensive lineman here”.

Both of them have an uphill battle to land a spot on the 53-man roster, with Cameron Heyward, Tyson Alualu, Larry Ogunjobi, Chris Wormley, and DeMarvin Leal all locks to already make the team, along with Montravius Adams being a very sure bet, and second-year Isaiahh Loudermilk being favored by the coaching staff, as well.

A practice squad spot is more likely at this point, and it wouldn’t be entirely unrealistic for both of them to be kept, especially since each of them is athletic enough to potentially play up and down the line—and even play coverage units on special teams, as has been hinted at in recent training camp practices. Indeed, special teams might be the deciding factor between the two, and what could squeeze one onto the 53-man roster over someone like Loudermilk or Adams.