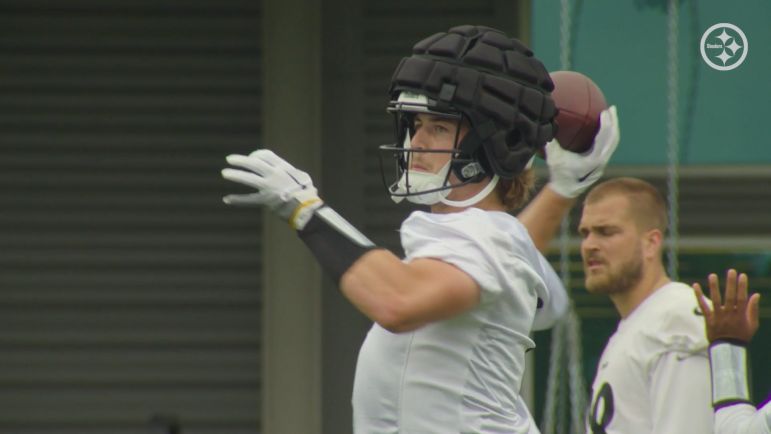 The Pittsburgh Steelers’ foreseeable future, one might say, is riding on the success or failure of Kenny Pickett, the man they drafted in April to be the face of their franchise at quarterback. But that doesn’t mean that they need him to be their starting quarterback right away, if he’s not ready for the role.

The team made plans long before they even knew they would have a shot at drafting picket, starting in 2021 when they extended Mason Rudolph’s contract by one year to ensure that they would still have him in the first season after Ben Roethlisberger. On the first day of free agency, they also signed Mitch Trubisky, a former second-overall draft pick who could serve as a bridge starter.

Whoever ultimately ends up being under center this year, all of the quarterbacks are looking forward to this week in the hopes of getting their group of skill position players back healthy. While Diontae Johnson is finally contributing after getting his new deal, Chase Claypool is working his way back from a shoulder injury, Pat Freiermuth is on the mend from a hamstring issue, and Najee Harris had his foot stepped on.

In no case is any issue deemed serious, and certainly, at least the wide receiver and tight end should be expected to be on the field very soon, if not today. Harris could potentially take a bit longer, and the coaching staff can be expected to verge on the side of caution.

But at the same time, they want their offense out there to evaluate their quarterbacks properly, and Pickett no doubt echoes the sentiments of the whole group in saying via the team’s YouTube channel, “Yeah, that’ll be huge getting those guys healthy, get Pat back hopefully soon, and get the whole team out there so we can really start clicking and get some good work”.

Pickett has spent a lot of time so far in camp throwing footballs to the likes of Tyler Vaughns and Connor Heyward and Mataeo Durant. Even under normal circumstances, he would not have been working with Johnson and Harris and company.

But entering the third week of camp, we can probably expect head coach Mike Tomlin and the coaching staff to begin looking to give the rookie some quality snaps with the first-team offense, which would be a necessity if they have any serious intentions of allowing him to compete for a starting job.

In the meantime, they are learning each other off the field. As we sit here right now, it’s far from clear if Pickett will even be getting a gameday helmet on Sundays come September, if Trubisky and Rudolph end up at the top of the depth chart. But the time will come, at some point, for him to lead an offense along with the likes of Johnson, Claypool, Harris, Freiermuth, and George Pickens, the man they drafted after him.