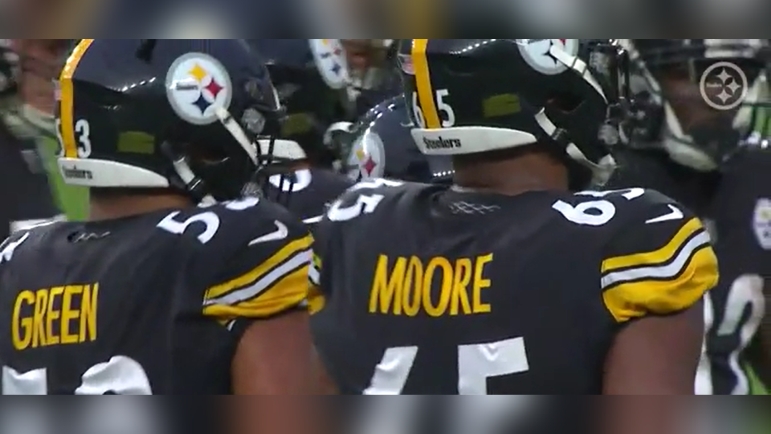 It’s still unknown precisely what the left side of the offensive line will look like when the Pittsburgh Steelers take the field in their regular season opener, but there is only one variable. The left tackle will be Dan Moore Jr. The left guard will be either incumbent Kevin Dotson or Moore’s draft classmate, Kendrick Green, who was the team’s starting center in 2021.

Mid-round draft picks last season, both Green and Moore were called upon to be day-one starters, even if that wasn’t the initial plan for the latter. But with the former now moved from center to guard, they are preparing to potentially play alongside one another, and there is already chemistry there.

“I think we’re doing pretty well so far. As far as talking about me and Dan, I feel real comfortable next to Dan”, he told reporters yesterday, via the team’s website. “Me and Dan, we communicate very well together. We’re always pretty good at getting each other on the same page”.

Dotson missed the Steelers’ preseason debut due to an injury, but he returned to practice yesterday, resuming the competition for the starting job, arguably with no clear frontrunner at the moment, the two routinely alternating reps.

While he was draft classmates with Green, Moore did spend about half of the 2021 season starting next to Dotson, so there should be some rapport there with his left guard no matter which way this thing goes. Still, he has appreciated playing next to the guy who was drafted a round ahead of him.

“He is a huge help”, he told reporters yesterday, according to Teresa Varley via the team’s ‘Camp Blog’ on its official website. “Not many people know how smart he is. Him playing center last year, having a really good grasp of the offense, helps a lot”.

Of course, it’s one thing to like the guy you’re playing next to, but it’s another thing to be able to actually function together as a cohesive pair. There are many instances within a game during which the linemen playing alongside one another have to be on the same page. Green believes he and Moore have already shown that.

“Just like, for example, last Saturday, we had a double team, and the defense got to moving around and stuff like that, but we both kind of said it at the same time, ‘Hey, we’re gonna double team on this dude’”, he told reporters. “That way we play a little bit faster, play a little bit more confident”.

It seems there will still be a bit more time before this particular position battle is settled. Dotson’s injury left him at a bit of a disadvantage, but he still has plenty of time to rebound and respond to his competitor’s opening salvo last week. The Steelers’ next in-stadium appearance will be in Jacksonville on Saturday night at 7:00 PM.