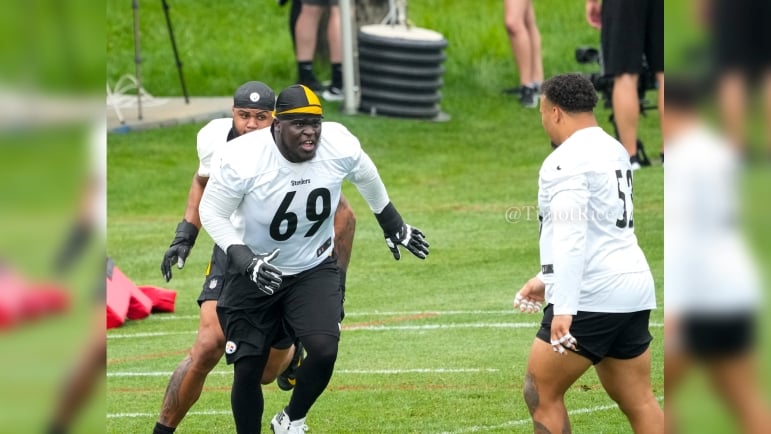 The Pittsburgh Steelers listed three starting positions as having co-starters for the moment on their first official depth chart, which did not include the quarterback position. The only position on offense that did not have one clear starter was left guard.

That is where third-year incumbent Kevin Dotson is attempting to fend off Kendrick Green, a third-round pick last season who did spend most of the year in the starting lineup as the team’s center.

The two have been splitting reps with the first-team unit thus far throughout the offseason, and veteran right guard James Daniels has been impressed with what he sees from the pair in terms of their willingness to put their own selfishness aside and work toward what’s best for the team..

“They’re great. They’re all helping each other”, he told Tim Benz of the Pittsburgh Tribune-Review on his Letters from Camp podcast segment. “KG and Dot, I know they’re both helping each other when they split reps, so when one person come out, they try to tell [the other], ‘Hey, I saw this, you can do this better’. They’re helping each other, so it’s very nice to see”.

Dotson, a fourth-round pick in 2020 out of Louisiana-Lafayette, impressed with his NFL readiness as a rookie in spite of the fact that he was robbed of a proper offseason, or indeed even a preseason, due to the pandemic that year.

He made four starts due to injury, two at right guard and two at left guard, and won the left guard job entering the 2021 season, albeit not without some consternation. There was an uncorroborated report about the team being unhappy with his work ethic, but more significantly, that he entered training camp injured.

Dotson started the first nine games of the regular season before suffering a significant ankle injury that would put him on the shelf for the rest of the year. The Steelers had to turn to B.J. Finney, J.C. Hassenauer, and then finally John Leglue, freshly called up from the practice squad for the first time in his career, to fill the void.

Since the end of last season, the team added not only Daniels to take over at right guard, but also veteran center Mason Cole, which is what allowed them to push Dotson and Green into the same spot, allowing them to compete, and hopefully make each other better in the process, to figure out which line combination works best.

Based on Daniels’ description, they have indeed been helping to make each other better, which is good to hear. Still, the question remains how good the group as a whole can be. Reports from training camp thus far do not hint toward a night and day difference in quality for the offensive line from last season.