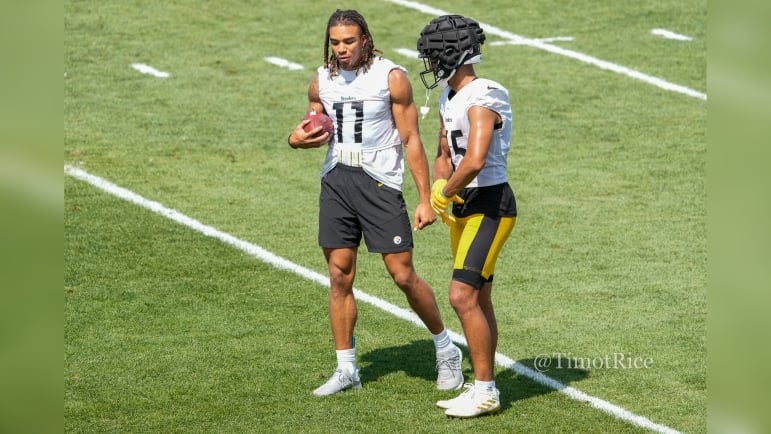 For most NFL players, they arrive into the league as young adults, still learning not only how to be responsible for themselves, but how to be professionals. Almost everyone who comes into the league has some growing and maturing to do, and that doesn’t happen overnight. Again, either personally or professionally.

For third-year wide receiver Chase Claypool, it seems as though he is hitting a key point in his maturity as a professional, and it’s been noticeable for his new position coach, Frisman Jackson, even if it’s his first year teaching him.

“He’s asking questions”, Teresa Varley quotes Jackson as saying for the team website’s camp blog. “Questions that (assistant receivers coach) Blaine (Stewart), who has been in the receivers room for a couple years, told me a couple of times he wasn’t asking those questions previous years”.

Stewart is in his fourth season with the Steelers as an assistant coach, and in his second specifically as the assistant wide receivers coach, so he has watched Claypool develop for his entire professional career, adding extra weight to his observations.

“He has a better understanding of the offense”, Jackson added. “He’s out there right now getting extra work in. He always is grabbing me during special teams period wanting to get work in. I’m starting to see that growth and maturity as a player and it’s translating not just on the field but off the field as well”.

With a shakeup in the wide receiver room since last season, Claypool is now the second-longest-tenured in the room behind Diontae Johnson, and with that, he understands that there is more of a leadership role on his plate, as well as an increased responsibility for him to perform on the field.

Jackson talked about how Claypool has been an example to the younger wide receivers, like rookies George Pickens and Calvin Austin III, to see how he works, although he has missed much of training camp due to a shoulder injury, which he says is fine.

Even on the field, things are changing for Claypool. He’s expected to take on a bigger role in the slot in 2022 following the departures of JuJu Smith-Schuster and Ray-Ray McCloud, who played the vast majority of the snaps in the slot on offense for the past couple of seasons.

And he’s attacked that with the right attitude throughout the offseason. He has embraced the slot role wholeheartedly since OTAs and talked about how it will benefit him as a complete player and work on his weaknesses and help turn them into strengths. He’s taken an excellent approach to his pivotal third season, but soon enough it will be time to put it all into action and produce.