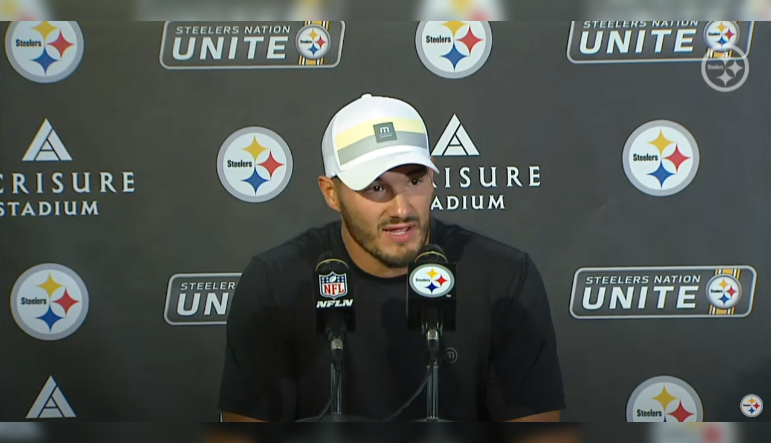 Three quarterbacks, three first-drive touchdowns on the night for the Pittsburgh Steelers. Quite the start to the preseason for the Steelers and second-year offensive coordinator Matt Canada. Maybe there is something to this whole “finally has QBs with skillsets that fit his system” thing, huh?

Based on the execution offensively Saturday night at Acrisure Stadium against the Seattle Seahawks, things are clicking for the Steelers’ new-look offense. As a team, the Steelers ran 69 plays, racked up 409 total yards on 11 drives, and scored 32 points in the win. It’s preseason, no doubt, but that wasn’t happening last season for the black and gold.

According to new quarterback Mitch Trubisky, who played two drives and led the Steelers on one scoring drive to open the game, things are translating from practice to the game right now for the Steelers, which is definitely an encouraging sign.

“Yeah, it was good. I think we got a lot of our base concepts down, run and the pass,” Trubisky said to reporters after the game, according to video via the Steelers official YouTube page. “We executed those well tonight, so the guys know them and we were able to go out there and execute. So it doesn’t matter what we call the guys are comfortable with everything that we’ve been repping up to this point. So it’s good to see, not just the first group, the twos and the threes and the young guys up there and guys who just got here this week were able to go out there and execute it well.

“So it’s definitely translating from practice into the game. And that’s what you wanna see.”

Putting up points, making flashing plays and winning the game is good and all for the Steelers, but for the coaches and the players in the preseason, it’s about seeing growth, having things translate from practice into the game, and being able to build on the work they’ve put in during training camp.

On Saturday night that’s exactly what happened for the Steelers offensively. There was a good balance of passing versus throwing the football with moderate success throughout the night in both phases of offense. Throughout the game Saturday night at Acrisure Stadium the Steelers’ offense certainly looked like what Canada has envisioned during his time in the black and gold. It looked like his versions of offense at Pitt and Maryland prior to his time with the Steelers.

That’s good news for the Steelers moving forward, as the offense will have to pick up the slack a bit for the defense if the Steelers want to compete in 2022. So far, so good.