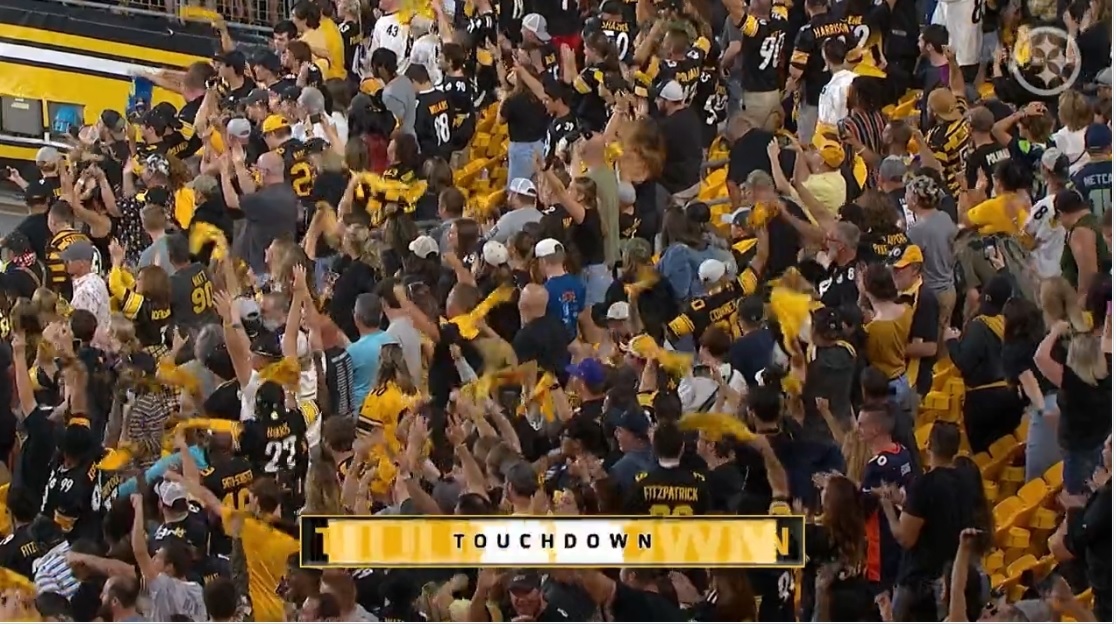 So when’s Kenny Pickett eligible for the Hall of Fame? Ok, that’s really jumping the gun but the atmosphere tonight at Acrisure Stadium had the feeling of a career-defining playoff performance. And Pickett’s NFL debut couldn’t have been scripted any better. A great performance with zero blemishes, barely any incompletions, and a touchdown drive in the final seconds to win the game. All night, Steelers’ fans chanted, “Kenny, Kenny” and all night, Pickett said he heard and felt the love.

Via The Trib’s Chris Adamski, Pickett spoke with reporters after the game about playing in front of Steelers’ Nation.

“I could,” Pickett said when asked if he could hear fans shout his name. “I’d be lying if I said I didn’t. Like I said, incredible feeling. Lot of family members here. My grandfather was able to come out. So it was special.”

Kenny Pickett heard the chants of his name pic.twitter.com/1jYUmU48vE

It didn’t take long for the chants to start. Fans offered an ovation as he took the field to start the second half and chanted his name following his first NFL completion, an 11-yard throw to Jace Sternberger on a boot to the flat. Pickett was flawless on his opening drive, going 5/5 and capping things off with a three-yard score to rookie running back Jaylen Warren in the right flat. He followed that up with a two-point conversion complete to Connor Heyward.

First, the chants for @kennypickett10.
Then the big run from @StevenSimsJr.

In something out of Hollywood, Pickett got the chance to close out the game. After being sacked on 4th down with less than two minutes to go, Pittsburgh got the ball back one play later thanks to Mark Robinson’s strip-sack of QB Drew Lock. In a tie game at Seattle’s 43 with 1:10 left, Pickett used his arms and legs to move downfield. He rushed twice for 12 yards and completed both his passes, first hitting Cody White to move the sticks on 3rd and 1 and following that up with a 24-yard touchdown to WR Tyler Vaughns, an on-time throw that allowed Vaughns to turn upfield and score with three seconds left. Pickett finished the day 13/15 for 95 yards and two touchdowns, a 132.6 QB rating, while rushing for 16 total yards.

“It’s a little bit different than a Pitt game,” Pickett told reporters after the game. “The energy…it was awesome.”

Mitch Trubisky remains the heavy favorite to start Week One but Pickett’s beginning was as good as it gets for a first outing. If he keeps playing this well, fans won’t just chant Pickett’s name to see more. They’ll start to chant his name to be this team’s starting quarterback.